Furthermore – and contrary to popular belief, the tunnels in question were originally created during the 1940s, many years prior to the Vietnam War that was, and were principally designed to combat and annihilate the occupying French troops of that earlier and equally barbaric epoch.

As we neared our intended destination, I reminded ‘M’ of my need to secure information on those soldiers who were slain by their jailors and never returned to their homelands – “yes, yes” he replied in mild agitation, “All in my plans for you today, no worries…but it is not going to be nice for you I think”, he ruefully concluded. 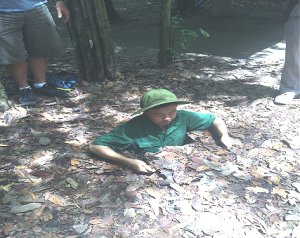 When one fully examines the tunnel infrastructure at Củ Chi, one is left in no doubt that the subterranean enclaves of Vietnam were a highly sophisticated arrangement of intersecting horizontal and vertical lines, positioned well below ground level and near impenetrable, housing, headquarters, kitchens, food stores, rest areas, hospitals, armouries and ventilation systems – the latter of which provided an early-warning of approaching US helicopters and other mechanised forms of military transportation. 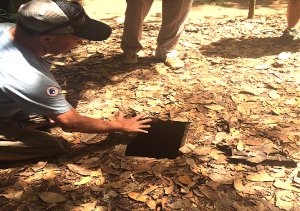 The entrances to the tunnels are too, incredibly small and narrow – and it takes a keen eye to identify their points of entrance and egress – in addition, it also takes a very small human frame, replete with the waist size of an average 8/10 year old child, to descend into these former centres of Vietcong command and control.

To the outsider, and even – it has to be said – to some historians, it is inexplicable that the Vietcong – and those who commanded their military forces for the duration of the war in these unforgiving jungle conditions, still merit re-assessment of their overall tactics, intertwined with insatiable interest and intense curiosity worldwide, of which I am no exception.

On the face of it, the Vietcong were hardly paragons of military astuteness or virtue – they were a savage, barbaric and unforgiving assembly of brigands, but this shallow assertion of ‘Charlie’ – misses the point to a large degree.

The Vietcong were a one-off – and shall remain so, particularly in comparison to the Islamic cowards who blight our planet present day – and most that preceded them. Similar to those they faced on the battlefield, they were incredibly brave, (near-suicidal) well-organised members of a national militia who reacted violently to inane decisions reached on Capitol Hill, located in a land faraway from their own. – this in stark contrast to the people they actually are, that being, warm, welcoming and utterly weary of discussions on war, even those who were not old enough to understand fully the affliction and torment endured by all who participated in an unwinnable conflict of decades past – fail to experience even a modicum of comfort when the distasteful subject of the conflict is raised in conversation – one senses that to venture into detailed dialogue with Vietnamese nationals on matters pertaining to the war, that one is hitting a nerve, simply too painful to dabble with – ‘M’ was the exception to an obvious hypersensitive societal rule – and for that I was grateful.

Following nearly three hours of strolling across the area of the tunnels, and with ‘M’s running commentary continuing to ring in my ears, we once again jumped into the car and headed in a northerly direction along a bumpy series of back roads, before long, these otherwise, semi-satisfactory highways, soon transformed into little more than well-worn tracks, illustrating all too vividly that the vehicle in which we travelled was in sore need of mechanical attention to its shock absorber system, by the time we alighted from the antiquated automobile, I mused on the distressing actuality that my backside had not felt such villainous malaise since the 1950s – essentially during that period when my father considered that I warranted yet another assault with his belt for whatever transgression – no matter the intense heat and humidity of the location I found myself in, and being engulfed in an area that was uncomfortably overgrown with dense forest and tangled vegetation, and inhabited with armies of airborne insects and Asian arthropods, those that immediately took to my flesh with appreciative zeal – just to secure liberty from ‘M’s vintage carriage, was Utopia indeed, irrespective of the draining meteorological conditions that intensely prevailed during that mid-morning in May.

Once parked up in a jungle clearing, my guide suggested that we walk in a single line fashion down and along the route he had opted to take, it was at best – a sheer drop into oblivion – dangerously steep and lacking any credible evidence that human kind had ventured into the location since Buddha was but a slip of a lad, I inwardly applauded myself for accepting ‘M’s invaluable advice the previous evening, thus stressing the importance of sturdy footwear and light clothing for our expedition, plus that of copious amounts of drinking water – I carried no less than 4 quarts of liquid with me that day, on reaching the foot of the treacherous incline which we carefully traversed, my water supply had been reduced to that of a meager dribble, my sweat loss was incredible – the man that paced ahead of me in an incredibly spritely manner – swinging his sharpened machete with sang froid expertise to create a continual clearing – was one who belied the fact that he had lived well over seventy summers in this testing and uncongenial terrain – yet one who did not sip a single drop during our long descent – I was in awe!