November 29, 2021 |  Category:   Retirement locations, Travel  |  1 Comment
Author:   Dan LaCombe  posts:  6    Author's   bioXDan LaCombe Background:
Dan LaCombe is a recently (early) retired Planner from the State of Delaware (23 years). He has been active all his life and now, with lots of time yet little money, embarks on one adventure after another, as was his life’s dream. Having taken journalism and photography in college, he worked as a reporter and photographer for the Ridgefield Press, early in his career, where he wrote numerous human interest articles. Several of his letters to the editor have been published in the News Journal. He is a modern day nomad with no permanent address and minimal processions. He plans to document his adventures in order to share this rewarding unconventional lifestyle with others.

We hadn’t done much planning.

After all, we weren’t even sure we would get across the border; there were so many discouraging words about journeying north. Was it worth planning a trip that might never occur?

The woman who answered the phone at the Inn on the Wharf in Lubec, Maine had said, “99% of Americans are being turned away.“ And friends thought we were crazy to attempt a Canadian adventure at a time when every day seemed to bring a new headline about travel restrictions and border crossing requirements. 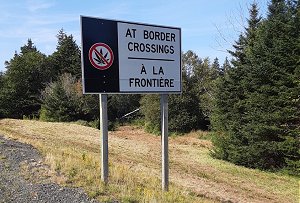 But we were determined to visit the Maritime Provinces! So on August 25, after having spent the night at this lovely waterfront Hotel in Lubec, we made an impromptu exploratory bicycle ride to Campobella Island.

The burly woman at the border was oddly friendly despite donning a thick black bullet-proof vest and being heavily armed. She seemed at once impressed and surprised that we had passports and vaccine documentation in our pockets, negative covid test result emails on our cell phones, and had diligently uploaded the required information onto the Canadian government website (CanTrav).

Consequently, a few minutes later we were gleefully on Canadian soil feeling as if we had gotten away with something. We toured President Roosevelt’s former summer retreat compound; being perfectly situated on a hillside above the sea with spectacular views, it’s no surprise Franklin Roosevelt and family spent many a summer here.

Next, we rode our bikes up a steep dirt track to an overlook. While gazing down upon the Bay of Fundy, with its dramatic shoreline, three local birders came by in search of migrating warblers. We learned from these ladies that a ferry departed every hour for Deer Island and another ferry ran from Deer Island to the mainland of New Brunswick every half hour.

It was a hot steamy day, so the thought of spending some time on the water was very enticing, especially since the AC in my old car was not working. The first ferry was $23 American and the second is government-run and free.

After a short pedal back across the border for our car, we were on our way and glad we opted for this more adventurous route instead of our original idea to cross further north at Calais/St. Steven. The random encounter with the birders had altered our course and enhanced our experience and this became the theme of our meandering journey.

The largest whirlpool in the world swirled menacingly below the lighthouse as we picnicked in a little park on the south end of Deer Island. The drive across the interior to the second ferry took about a half hour and was fairly nondescript and that’s when I declared, “it’s all about the water!” And this would generally apply to the balance of the trip. The beauty of Atlantic Canada, at the risk of speaking the obvious, is largely along the coast – truly stunning beauty!

Feeling somewhat disoriented from using GoogleMaps and the whirlwind of the day’s events (including losing an hour in a time zone of which we were unaware) we wandered into a convenience store and essentially asked the young lady behind the counter, “where are we?” She was our first real example of the amazingly friendly and helpful people of Atlantic Canada. She patiently helped us pick out the best map, showed us where we were, and directed us to the local swimming spot.

After cooling off in the crystal clear waters of Lake Utopia, we sat on the sandy beach and plotted our next move. And this was when we first concluded to strategically ignore Google maps, as it has no appreciation for beauty, only time. Driving east along the rugged coast; paralleling the slightly faster and much less scenic highway just a few miles inland, we stopped at several mom-and-pop motels, but there were no rooms to be had. Fortunately, we had brought along a tent (as backup) and opted to camp for the night at the New River Provincial Park.

Across the road from the campground there’s a lovely crescent shaped beach and all the way to the left is a trail that leads along boardwalks through bogs to the tip of a peninsula with stunning views and secluded beaches along the way of this 5 mile loop. 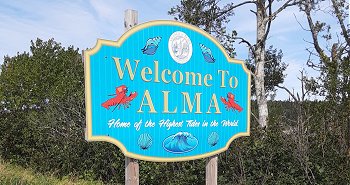 Afterward, I broke my two-night-minimum camping rule and we were on our way toward the Fundy National Park and the little adjacent town of Alma. We had made a two-night reservation so that we could relax a bit and explore the park. The hike to gorgeous Laverty Falls was very rooty but picturesque and you can wade beneath the cascades in a small pool of brisk mountain water. Red Adirondack chairs are placed at various scenic locations throughout the park and we had a pleasant picnic lunch beside a pond at one of these sites.

I would be remiss if I didn’t mention two amazing takeout eateries in Alma – Fundy Take-out and Alma Lobster Shop. Both are waterfront with great food and very reasonable prices and you can BYOB, so it’s very affordable delicious seafood! 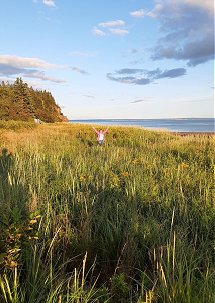 Upon leaving Alma, we again ignored the Google maps lady and took the slightly longer and less traveled Route 915 along the coastline, which was absolutely charming – a postcard-worthy scene around every turn.

I normally don’t like to book lodging as it reduces your ability to make last-minute adjustments to travel plans, but we had quickly learned that rooms were few and far between, so once again we did book a room in Pictou, Nova Scotia.

In the morning we headed further east making a stop at Hopewell Rocks, which is one of New Brunswick’s premier tourist attractions with good reason, as they are quite spectacular – a must-see if you are in the area. These huge sculpture-like rock formations rise from the beach having been formed by extreme coastal erosion.

As we approached the Nova Scotia, traffic came to a standstill and it became apparent that all vehicles were being stopped by officials at a makeshift Provincial border crossing. After 15 minutes or so we worked our way to the front of the line where a friendly officer asked us if we had filled out the online form to enter Nova Scotia. We hadn’t because we did not know of this Covid-19 related requirement. We had, however, previously decided to forgo going to Prince Edward Island having read of their additional entrance requirements and associated costs. Anyhow, he kindly asked us to pull into a small parking area and go online to complete the form, which only took a few minutes and we were on our way.

What I Did in Social Media Jail – I Became an author