My intended half-hour bid to reach the museum was prolonged by nearly three hours, torturously slowed by the allure of mouth-watering fare and that of my insatiable inability to resist temptation, to say little of the friendliness of the people who make-up this special community – and for their need to engage with a newly arrived son-of-Caledonia, I was overcome by the manner in which the populace wanted to meet and greet the ‘new-kid-in-town’, it was good to talk – I certainly couldn’t consume anymore noodles, chicken or spicy beef, but that was not an issue in their warm and reassuring eyes, simply to familiarise themselves with the outside world and a representative of it – brought with it a sizeable social profit that could not be gleaned on any other day – I was humbled.

On gazing at my wristed, Accurist timepiece, I politely severed my ties with the market people and hastily made strides along the busy conduit known as ‘Vo Van Tan’, racing against time to reach the museum before its doors closed for the day at 5pm – some 45 minutes hence!

With 20 minutes to spare, I finally entered the building and soon acquainted myself with its surroundings. This historical establishment was the prominent start point in my pursuit for further knowledge regarding missing military personnel – and then to unearth those one-time Vietnamese combatants who could provide further assistance to my queries.

The museum specialises in military research, collecting, preserving and exhibiting the remnant proofs of Vietnam War crimes and their consequences. It was opened on the 4th of September in 1975 and welcomes over half a million visitors each year, attracting both Vietnamese and international tourists, including American and Australian nationals. 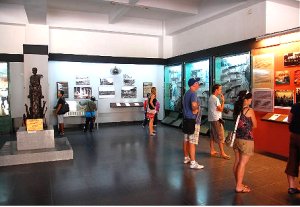 There exists within the walls of this special building, a mother-lode of distressing artifacts and acutely hideous memorabilia connected to the war – that of which painfully introduced me to the stark realisation that no less than 134 journalists, from across 11 countries, also perished in their pursuit of journalistic endeavour. The catalogue of themes that are compressed within the museum cover a plethora of subject matter, none of which I hasten to add, glorify war or the final outcome of the fighting that occurred on Vietnamese terra firma, over four decades ago – this confirmed by a large framed testimony, unavoidably viewed as one crosses the threshold to the museum – thus; “The Museum Calls the Public to say ‘NO’ to War – and ‘YES’ to Peace for World People Solidarity”.

I unhesitatingly concurred with this profound sentiment when passing through this portcullis of my posterity – and soon met the man who was to guide me to a site where tourists seldom, if ever tread, many miles north into a dense, inhospitable jungle-based settlement, that of which told its own powerful story – all too vividly – one that led me to a consecrated corner of Vietnam – and Laos – those that hold the hidden, interred the remains of soldiers hailing from Perth to Pennsylvania – plus that of countless, innocent Vietnamese nationals, men, woman and children!

As I slowly meandered through the glassed conduits of the museum – and vainfully attempted to absorb the odiously explicit and agonisingly striking contents of the innumerable cabinets on show, including hateful items connected to aggressive war crimes and imprisonment conditions during that accursed epoch, I came to recognise that the peaceful ambience that permeated throughout the building – was more to do with me being the only visitor who remained – all others had paid subservience to the listed opening and closing time and had subsequently left me, alone with my thoughts and utterly oblivious to the demands of the clock – thus; a rather large and delightfully ornate sphere of mechanical timekeeping, that of which hung proudly on the main wall of the establishment – undoubtedly a remnant of the days of French occupancy in this wonderful land – one that commenced life in a French railway station quite possibly – and one that was urging me to quickly quit one’s engrossing perusal and evacuate the museum with immediate effect.

As I reluctantly headed for the exit, briefly pondering en-route as to what to do next with my day, or the remainder of it, I detected light footfall pacing directly behind me – my initial thoughts were that one of the several ushers employed within the museum, was possibly dissatisfied with the near-geriatric, unadventurous strides one was making towards one’s point of egress – and had therefore opted to accompany me to the door in an assisted and all-together brisker fashion – as I turned in the direction of my stalker, I was met with the rather diminutive figure of a Vietnamese national of around my own age, I [incorrectly] ascertained – bespectacled, balding and beaming from ear-to-ear with an enormous smile, that of which drew to one’s immediate attention that regular consultation with a competent dentist had not been a huge feature throughout his entire existence – his personal denticulation being represented my a trio of near-blackened, well- worn pegs, those defiantly housed in his top gum.

“Parlez vous monsieur anglais”, he cheeringly offered, combined with a mild spray of saliva that must have been incredibly hard to contain during each and every occasion he uttered a word or statement – given the unprepossessing and regretful absence of the molars and incisors that once lodged within his skull, the light spritz that moistened my face when he firstly addressed me – could have resulted in an unwelcome reservoir of Asian spit being splattered across one’s facial features – thankfully – and from many decades of practice I suspect, a possible torrent was quelled by his undeniable oral aplomb whilst engaging in social intercourse.