Unbeknown to me at that moment in time, ‘M’ had drawn us into a location that was not too far from his home of earlier days, within this locality, we soon stumbled on forgotten military relics from decades previous.

Just prior to reaching the site in question, the full glory of the forest was revealed to me in the birthstone bright light that seeped through the jungle canopy, I was indeed ensconced within another world. The mighty almond-brown trees stood magnificent and serenely- and their crusty exteriors, helped by the first blushes of a new day, gave them a green-going-to-gold complexion, none to dissimilar to the horticultural changes that one sees as late summer transforms into autumn in the country of my birth.

As we strode past the many suede-soft flowers en-route to our intended rendezvous point, I caressed them gently and received a strange, but not unpleasant sensation of tingles as I did so – my ears then perked up at the metallic, tinkling sound of a close-at-hand stream, confirming that our destination was a mere stones-throw away, I then caught sight of the narrow rivulet to my left, it flashed with a tinsel tint through the heavy lace of leaves, a majestic sight, appearing as a polished mirror of silver, a shiny spillway, bordered with chalk white boulders, that of which were embedded in deep pillows of moss.

As we continued a little further down the restricted track that now ran adjacent to the babbling brook, the rapidity of the water flow appeared to increase in speed, causing a rocky gurgling as water met with stone, emitting sounds that can be best described as swishes, clunks and clops.

I was becoming intoxicated with the natural feast that graced my eyes – sight and smell vied for my attention in this enriching dream world, together with its sweet fragrances, alluvial and palliative – delightfully soothing the pain of my previously numb rear-end and aching knees – it was at this juncture I wanted to scream long and hard in a skywards direction – in a futile attempt to shake God from his inexplicable slumber to explain his lack of attention to detail – or pitiful justification for a job ‘half done’ on this troubled planet he allegedly created – the peace and tranquility that oozed from this small corner of a south east Asian jungle was an all-too-rare experience for the vast bulk of his supposed creations…”Where did it all go so wrong for mankind”, I solemnly deliberated – poor management on an absent Jehovah’s behalf, I bitterly surmised.

The conclusion of our downwards trek on this stage of the journey was heralded by ‘M’, raising his trusty machete above his head and wearily stating that we had arrived – “You rest mistah, take water and then we go in”. Go to precisely where I couldn’t fathom-out as there was nothing to be seen other than the afore-mentioned jungle spectacle – I chose not to remonstrate with his proposal – in fact, I enthusiastically complied and placed my back against an upright boulder, with head nestled on a mossy mound that adorned it. My eyelids soon closed, allowing one’s stream of consciousness to take hold and transfer one across the threshold of infinity – the memory of that soft and peaceful interlude still lingers today, I could have slept for many hours if not for an interruptive prodding on my shoulder, “Time to go in mistah, you wake up now”. 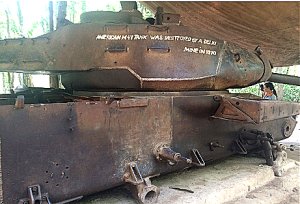 I wearily raised myself from my makeshift sleeping position and followed behind ‘M’ – for no more than a hundred yards, he then parted a final curtain of foliage – 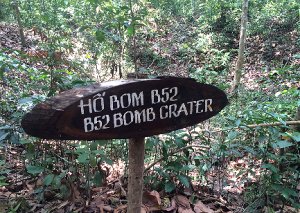 we had stepped back in time, to an era when the paradise in which I then stood, had descended into an abyss of death and destruction, many years ago – and where the jungle had, over time, hidden and enveloped evidence as to the existence of former jungle dwellers – what did remain was the broken tools and the effects of their repellent presence during the Vietnam War.

Shortly after commencing on this phase of my journey, ‘M’ suggested that we stop for a while in order to consume some sustenance before continuing further, my senses told me that my elderly guide was beginning to feel the strain – but had driven on [relentlessly] in order to secure his $US40.00 tour fee – a paltry sum by western standards, but a veritable, financial windfall by his own. We soon occupied a well-shaded corner of our new location, wearily positioning ourselves under a large, woody perennial plant that is referred to by local inhabitants as the ‘Sao Den Tree’, a hardwood species that provided villagers in earlier times, with a highly durable trunk in which to carve hulls for their fishing boat fleets.

As we each consumed a bowl of spicy soup, that of which was provided by a diminutive, painfully frail and antiquated [female] member of the jungle residency, this somewhat frugal, if not incredibly tasty fare, immediately reignited conversation between ‘M’ and me.

“You ‘guv-a-ment’ mistah – you wok for guv-a-ment? I was mildly surprised by the question put to me by ‘M’, I , after all, had earlier revealed to him that I had served as a professional soldier and had represented my own government for many years in a uniformed capacity. As I again stressed this point, my host impatiently responded by saying; “No, no, not you guv-a-ment, my guv-a-ment?” In order to quell further the apparent angst that now consumed my companion, I again emphasized the circumstances behind my mission – and that he should be under no illusion regarding the sole, private aims of my draining quest.

On taking receipt of this unabashed utterance –twinned with the genuine honesty that accompanied the riposte, ‘M’ laid down his empty bowl beside the machete sheath, then blew out his cheeks and completed the action by taking a deep intake of breath.