In answer to his out-of-the-blue query, I responded in the affirmative, but strongly stressed that I was a Scot, not an Englishman, one that utilised the English language purely as a means of human communication – emphasising further that all comparisons with England ended there – he immediately burst into a spell of incredible, uncontrollable laughing, lasting the best part of a minute – “good, very good” he chortled in broken, yet sufficiently proficient English, “just like me, I’m no Thai or Korean – no a ‘fookin Chinky either, I’m Vietnameeeese-and I too very proud of that!” I instantaneously came to like him.

As it transpired, my small-scaled inquisitor on the day proved to be a fascinating human being, one that simply went by the name of ‘M’, his mother, apparently, had set her heart on calling her son Minh, (meaning intelligence) yet the wider family disapproved of her choice of title for her second born, ultimately, she settled for ‘M’ as she couldn’t come up with another honorific that began with the afore-mentioned letter.

‘M’ confided that he quickly determined that I had been military man, largely through his first impressions of my gait and upright and muscular frame as I entered the museum – an astonishing analysis when one considers that I was nearing 65-years of age at that specific juncture – but an accurate assertion nonetheless – I inwardly applauded myself for maintaining a life-long gym regime and dedication to the game of golf, musing further that one may take the boy out of the army, but never the army out of the boy, personal fitness being my mainstay – and long after my ‘green suit’ had been returned to the Quartermasters Department of one’s final regiment.

Readers of my narrative thus far, could be easily forgiven for [wrongfully] assuming that ‘M’ represented the museum in a professional capacity, he certainly does not!!

‘M’ – in quintessential western speak, is what can be best described broadly, as an opportunist, or, dare I say, a hustler, one who could easily and misguidedly be considered as little more than a ‘devil-may-care’ guide, one bereft of true planning and principles regarding the tour travail he pledges to undertake with ‘selected’ members’ of the customer ratio he regularly approaches within the halls of the museum – and on a bi-monthly basis. Yet, as I was to emotionally learn, he was a million miles removed from that of some fast-talking prevaricator or fanciful fabricator of fact – his crinkled facial skin told its own story, each crevice and elongated line that adorned his semi-weary appearance – was not solely the result of a long existence under the ubiquitous and unforgiving Asian sun – but that of the agonies he had uninvitingly endured during the course of his torturous mortal coil.

With the doors of the museum firmly locked behind us, ‘M’ and I opted to sit on the steps directly to the front of the institution in order to continue our lengthy conversation – fuelled by endless cups of coffee, (‘M’ does not consume alcohol) courtesy of a nearby female vendor – plus that of two plastic dishes of a noodle-based substance that my late mother would have referred to as a ‘dogs-dinner’ – yet, despite the suspect appearance of this rough and ready repast, ‘M’ ravenously gobbled down the entire fare with unrestrained rapture – if not a little unconvinced by my admission that I had eaten copiously only an hour or two earlier in the day – for a brief moment, his demeanor struck me as being mildly dejected by the refusal to join him in eating – some time later – and with the benefit of hindsight – I so wished that I had made at least a timid effort to share a little ‘Bánh phở’ in his company – a remiss decision that I now unreservedly regret – it was the gesture that was critical – and not the consumption of more noodles and beef – I scolded my myself for this display of crass myopia – and for several days too, I reluctantly must add.

No matter the horrendous booty that filled this historical institution, I had unwittingly come across an individual who had actually lived through the appalling debacle that was the Vietnam War, a son, husband, father of three and farmer he once was, and his story crushed me – to say nothing of the journey that was soon to follow in his company.

As it transpired, ‘M’ revealed that he was in actual fact 76 years of age, one who was born and raised as one of five siblings, and then in-turn, he reared three of his own, together with his school-teacher wife in a village community that by went the name of Bến Súc, located deep in the Dầu Tiếng district, some 20 miles to the northwest of Saigon – During the early morning of the 8th of January, 1967, over sixty troop-carrying helicopters took off from the Dau Tieng airstrip and deposited 420 soldiers right in the middle of Ben Suc.

The US military intelligence sources of that era decreed that Ben Suc was the headquarters for Vietcong control of the widely known ‘Iron Triangle’, and therefore, a legitimate military target – and one that had to be ‘taken-out’.

The American soldiers who were tasked to infiltrate and ultimate take control of the village on that sultry, hot morning, had actually expected considerable resistance on arrival at this specific locality of military significance. Instead, they encountered only sporadic small arms fire. Following the brief battle that ensued, the villagers were immediately evacuated from their homes and taken to a new refugee camp at Phy Loi, near Phu Cuong.

The 1st Engineer Battalion of the 1st Infantry Division then moved into Ben Suc with ploughs, tank bulldozers, and a number of M-48 anti-mine tanks – and then leveled the entire village within an hour, thus destroying every home and building, the soldiers then continued to eradicate all evidence of the jungle habitat by bulldozing the mango, jackfruit and grapefruit fields that enveloped this now dead community. 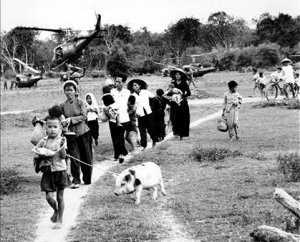 In addition to this thorough raid by US Forces, miles of tunnels used by the Vietcong were also destroyed. Astonishingly, ‘M’ assured me that a mere two days following this attack, the Vietcong were back in the area, re-building their destroyed stockade. What could not be rebuilt, nor returned, ever, were a wife and two daughters, lost to a simple farmer, one that had lived in constant fear of such an occurrence ever happening within his domain, the continued presence of the Vietcong in his village would ultimately draw in the might of the western military he constantly and scarily mused – when that brutal day unavoidably and finally arrived, the harrowing US charge transformed 6000 members of the surviving community, into confused, frightened and wounded civilians, displaced refugees – many becoming orphans, thus rendering the military consensus on pacification and “Search and Destroy” missions to a receptacle of utter waste and soldiery ineptitude.