When the noise of battle subsided and the helicopters and other forms of mechanised military hardware – along with countless numbers of innocent civilians, departed this once tranquil and abundant hamlet, ‘M’ sat by a nearby stream to nurse a severe wound to his right leg, hitherto, he had wrongfully figured, in a dazed, bloody, pain-ridden and tearful state, that his entire brood of three children, along with a 27-year-old wife, had been removed from their ancestral home on that loathsome day, he then detected the sound of tormented groaning and a child’s pitiful weeping close to were he lay – as he desperately crawled along the bank of the waterway to uncover the source of the distress, ‘M’ was soon met with the mortally wounded frame of his eldest child, Chinh, a son of eight years, one who had wandered down to the stream to collect water just prior to the earlier attack – and one who had sustained a bullet wound to his infantile chest during the violent melee that occurred only a couple of hours earlier.

Chinh, despite the magnitude of his injury, clung to life for three more days, when the Vietcong forces returned to his village 48-hours after the US clash with their resilient foes, ‘M’ pleaded for a medical representative to come forward to assist in his child’s plight, yet little regard was shown to the stricken youngster, other than a disinterested and medically unsophisticated explorative investigation to remove a large chunk of shrapnel from the dying child – the result of which led to his passing within minutes of the bamboo-speared excavation into his crushed ventral plate. 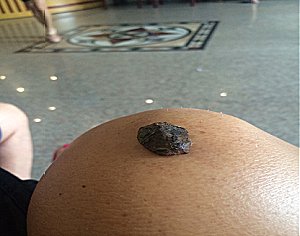 To this day, ‘M’ carries in a small locket draped around his neck; the same piece of shrapnel that claimed the life of his young son over 48 years ago, the only remnant remaining of a life previously lived. As he talked and unconsciously fondled the offending piece of steel that sat within the mini-casket on the gold chain, he caught sight of my somber attention to the distressing metal nugget – and then with dexterous slight of hand, speedily freed it from its encasement and invited me to examine it more closely.
Irrespective of the intense heat that permeated throughout the city centre during our now near-maudlin discourse, that small mass of murderous crystalline was a strangely cold – as with everything it represented – indisputably chilling.

I soon started to quiz ‘M’ on his apparent lack of bitterness when re-telling of the atrocities that so consumed his life, “I forgive, I forgive” he repeatedly stated, adding further that it was a stupid war and that he was not alone in his sense of Herculean loss, the bloodshed pertaining to the Vietnam War had caused pain and misery to many other loved ones across the globe, in his profound opinion, “From Saigon to Sydney to Sacramento, we who survived, all cried the same tears and shared the same heartache, stupid war, stupid ‘fookin war’, I’m ‘no’ alone in my situation, but that’s why I do this, I never forget, my family must have this, it’s my duty to them”. I struggled to contain my own tears during his determined and unabashed confession.

As we bade each other goodnight – and with firm plans in-place to meet up the following morning in order that I may accompany ‘M’ to visit a number of sites that bore testimony to the horrors of days gone by, I cursed myself for displaying uncharacteristic emotion on a scale that he seemingly struggled to comprehend, why oh why had I become so sentimental and distressed when he had so comfortably – and in an all-together composed non-retaliatory fashion, graphically exuded his terrible recollections, without evidenced of deep-seated hatred?

I guess I have evolved into an incurable cynic regarding the ever-increasing sentimental, if not the hypocritical Western climate in which we exist these days, thus seeing me living within a ‘rush-to-gush’ social atmosphere where there is great premium on displayed emotion, that which it’s good to be seen to emote. Yet, it disturbs me when some ‘stick-insect’ models or ‘one-hit’ wonder pop star divas, so-called, lends their presence, as an example, to the inhumane struggles endured within some failed African state, per se, sartorially dressed down and bereft of the make-up that enhances their otherwise plain facial appearance, they who pounces on a photo opportunity to be snapped holding a baby dying of AIDS or starvation, they are possibly undertaking a valuable service to a more than worthy cause, but at my age, I always remain unequivocally skeptical when looking at such media opportunism, one is never lost to the undeniable fact as to the benefits of the photo shoot for the ‘celeb’ in question

I have therefore become hardened and possibly disparaging to those who attempt to extol moral vanity on critical and life-taking issues – yup, when the lights go out and the ‘players’ return to the remote comforts of their newly acquired 21st century lifestyle, any semblance of relief or liberty from their brief presence in under-privileged lands, seldom appears to alleviate the inherent struggle for survival in destitute nations.

As I laid my head on my pillow late that special evening, I recognised that I had softened in my otherwise draconian and skeptical stance on matters of the heart – I am no ‘celeb’ and I did not seek financial remuneration or public recognition from this new-found relationship with a victim of earlier day terror – as my eyes started to close at the conclusion of a rather long and testing day, I subserviently submitted to the call of Morpheus, wearily sensing that what I was about to experience over the time that was soon to follow, would stay with me for the remainder of my life – it shall indeed!

Come 6.30am the following morning, ‘M’ and I were underway, tightly squeezed into his beat-up and incredibly uncomfortable 2CV Citroen motor car, heading in the direction of the Củ Chi district of Saigon, slightly less than a 60-minute drive in his beloved jalopy – yet a journey time that would have been comfortably halved in a more contemporary mode of transport. As we cruised towards the site of the infamous Củ Chi tunnel network, my guide informed me that the underground conduits used by the Vietcong were initially utilised in order to evade American and Australian forces during the elongated course of the war, adding further that some of the fiercest and bloodiest battles took place in the intensely humid and utterly harrowing confines of these underground passages.