“I lie to you mistah, I no forgive any people, they all ‘fooking’ bad, they kill my ‘familee’, they kill me, I dead for long, long time – I hate all people who did this to me – no the Yankee’s, no the Aussie’s, I hate commie’s – they still here, must be safe by no saying much to wrong people – you ‘understan’?

I nodded silently in ‘M’s direction, engaging his eyes as I did so, registering that he was a victim, not merely a fortunate survivor of the unquestionable horrors that had claimed everything dear to him, but a near-anonymous casualty of a war that no one really understood – belonging to a loathsome, far distant epoch of which few in the contemporary world can possibly remember – nor wish to!

Yet, ‘M’ remembered all too well the Armageddon – and graphically delineated to me, during that hellishly hot and humid day, his own personal account of the inferno that was the Vietnam War – I determined that he had waited a long time to ultimately find psychological release with a trusted source – he had found it – or me, more to the point.

Some hours following the death of his young son, and with his remains interred in some makeshift hole on the jungle floor ‘M’ speedily recognised that the invading forces of the north, that of which now occupied his near destroyed village, were not in a mood to tolerate the presence of anyone other than those who made up their own numbers, he therefore decided to flee the burnt-out surroundings that once represented his home environment and make for a safer haven, somewhere in the American sector – wherever that was, he [erringly] selected a northerly route as this was the direction that most of the US aircraft were coming from during their now-incessant bombing raids.

As he struggled to venture towards liberty in the direction of a dense and unforgiving jungle, together with a injured and now seriously infected leg wound, it dawned on him that he had not been afforded the opportunity to provide his deceased son with a fitting farewell – in effect, he had bid a reluctant ‘goodbye’ to his boy only hours before – and for the final time – with only a small metal nugget to remember him by – he vowed that he would never part with it!

For more days than he can recall, ‘M’, now a lost and lonely fugitive in a dangerous and unforgiving tropical rain forest arena, sensed that his own demise was imminent. Having strapped his injured left leg with inadequate bamboo sheaths, he was soon incapable of staying on his feet, the pain that ravaged his entire body had rendered him incapable of limping on any further – so he crawled, he crawled for approximately two days before eventually being found by the ‘Pathet Lao’, the Laotian equivalent of the communist Viet Cong – He had unwittingly entered Laos.

Once apprehended by his captors and being informed as to his precise location, ‘M’ quickly determined that he had covered over 200kms since embarking on his escape route, several weeks earlier, now starving, dehydrated and dangerously emaciated, he silently wept and asked of his God, to quickly snuff out his life, he had no more to give – but his orison went unanswered – ‘M’ was to live on to both witness and [ultimately] survive the most bestial and barbaric excesses known to mankind.

The members of the Pathet Lao militia took him captive and dragged him on a makeshift wheel-less trolley through more jungle. Each night, he was tied spread-eagled on the ground to four stakes, to stop him from escaping. Each morning, his face would be so swollen from mosquito bites he was unable to see, but far worse was to come. After an early escape attempt, ‘M’ was picked up by his guards at a jungle water hole. This was when the real torture began.

“I had escaped from them – and they wanted to get even,” ‘M’ mournfully recounted. They would hang him upside down by his ankles, with a nest of biting ants over his face, until he lost consciousness. At night, they suspended him in a freezing well so that if sleep came, he feared he would drown. Other times, he was dragged by water buffalo through villages, his guards laughing as they goaded the animal with a whip.

Bloodied and broken, with fear of gangrene to his injured limb being a constant worry, he was asked by Pathet Lao officials to sign a document condemning America, but he refused, so the torture intensified. Tiny wedges of bamboo were then inserted under his fingernails and into incisions on his body to grow and fester, the appalling scars of his physical persecution remain clearly visible to this day.

“They were always thinking of something new to do to me, I so wished for death”. “M’ recalled the night when one of the intensely cruel Vietcong jailers tied a rope tourniquet around his upper arm. He then placed piece of wood into the bind, and twisted and twisted until his nerves cut against the bone. My hand was no good for six months”, he dejectedly summarised, gently stroking his now-near withered left hand as he did so. 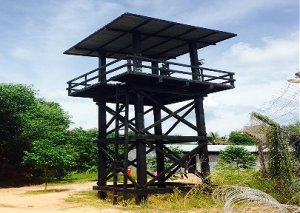