After some weeks, ‘M’ was handed over to the even fiercer branch of the Viet Cong. As they marched him through a village en-route to the prison camp, a man stole the metal nugget that claimed the life of ‘M’s son, he desperately complained to his guards of the theft, they soon found the culprit and summarily chopped-off both his hands with a machete – then threw him aside like a soiled rag, throwing back the small chunk of shrapnel to their horrified captive, namely, ‘M’. “I know right there and then that you don’t screw around with the ‘fookin’ Viet Cong,” he mournfully added.

Ultimately, ‘M’ arrived at the designated destination: a Viet Cong/Laotian prisoner of war camp, located many miles from civilisation as he knew it “I had been looking forward to stopping,” he [ironically] said. “I was tired, hungry, and thirsty and so wanted to stop being dragged by ‘Charlie’ through the jungle.” What he initially came to see horrified ‘M’ – his weariness immediately subsided the very moment he laid eyes on the first prisoner who came into view – An American officer adorned in military rags – barefooted and aimlessly carrying his intestines around in his hands – he died shortly afterwards. 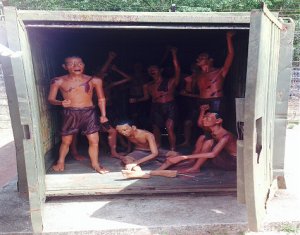 Within moments of his arrival at his new place of confinement, ‘M’ was thrown into a large metal box, similar in design a shape to that of a modern-day shipping container. Ensconced within this hellishly hot torture chamber, lay 11 other prisoners, a mixture of Thai and Vietnamese nationals, plus a brace of Americans, presumably, downed pilots, one of which had no teeth, the direct result of constant pleading with fellow inmates to knock-out his rotting denticulations with a rock and shaft of bamboo, a draconian action to release a reservoir of poisonous pus that had built-up in his gums over many months of dental neglect – in actual fact, the occupants of the ‘oven’ had been held as prisoners by the Vietcong for over two years!

Within the horrid confines of his prison – and several weeks after his capture – ‘M’ sensed that food was beginning to run out, his leg wound was now healing but his stomach was empty…as with the remaining group who shared the cramped metal cabin. Subsequently, tensions between the incarcerated population soon grew, they were now facing famine and unavoidable starvation – before long, ‘M’ and his fellow inmates were provided with a single, heaped bowlful of rice to share, (An entire day’s food ration} their guards on the other hand, would stalk deer and then remove the grass from the slain animal’s stomach and present to the prisoners as an additional means of sustenance – the guards then roasted the carcass on an open fire and devoured it accordingly, in direct line of sight of those who were dying of starvation.

For ‘M’ and his fellow prisoners’, the only “treats” on offer were snakes they occasionally caught from the communal latrine, or the rats that lived under their hut which they could spear with sharpened bamboo spears. Nights brought their own misery. The men were handcuffed together and shackled to medieval-style foot blocks. They suffered chronic dysentery, yet were made to lie in their excrement until the following morning.

Following several months of inhumane torture, ‘M’ and one of the Thai prisoners, overheard the guards talking.

They, too, were starving and just wanted to return to their respective villages. They planned to march the captives into the jungle, and shoot them, pretending they had tried to escape. One of the US service personal convinced the others that now was the time to make a move – He explained to me that the stronger prisoners intended to overpower the now meager guard-force at lunchtime, (Only seven guards were in place during the day by this point) when they put down their rifles to take food. They ascertained that there were precisely ten minutes in the day when they could effectively strike.

During that brief interval, they had to somehow release all prisoners from their shackles.

When the day finally arrived, the cook yelled ‘chow time’ and then ‘M’s’ handcuffs were removed in order that he may attend to his daily duties in and around the food preparation area. With heart pounding; he slipped through a loosened fence adjacent to the waste area, out of sight of his captors, he then went on to seize a large bunch of keys, three rifles and a number of belts of ammunition. 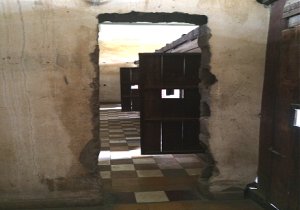 He ran back into the camp with his booty, dropping two of the weapons as he did so, but thankfully, these fell fairly close to the main cellblock he was making for, a run-down concrete structure that housed a number of Australian prisoners – those who he had rarely laid eyes on during his confinement – but those who always appeared as the most able to instigate the initial breakout – always the most vocal too!