Almost beyond speech, the man whispered to the crew that he was a farmer from the south and that he had lost his wife and children to the fighting, adding further that he had been a prisoner of the Vietcong and escaped from a Laotian Jail, Before passing out, he uttered the words – “Please take me home.”

‘M’ had been missing, presumed dead, for 15 months, and subjected to barbaric torture at the hands of his captors.

But, plotting his getaway shortly after the attempted breakout, he escaped his prison by sheer force of will, surviving in the world’s fiercest wilderness with primal tenacity as death stalked his every step.

‘M’ was taken to Da Nang Hospital in Vietnam for treatment, where he was interrogated by, “lots of people in uniform”, all wanting to learn more about the precise location of the camp in which he was imprisoned, along with the American and Australian military personnel who shared the same suffering, they repeatedly asked for the names of the servicemen in question, “Were they Rangers, were they Pilots, were they Infantry? ‘M’ could only recall the name of one the western soldiers; one who went by the title of ‘Bluey’ he being the lofty individual who ‘M’ passed the first seized rifle through a cell door.

At night, however, and for many months following his release from hospital, ‘M’ was tormented repeatedly by awful terrors and had to be tied to his bed. In the end, his friends put him to sleep in a large cot surrounded by pillows, positioned in the corner of a small sleeping chamber “It was the only way that I felt safe,” he said.

The image that haunted ‘M’ related to the ‘pot’ – this being a large wok in which those prisoners who failed to curry favour with their jailors, found themselves thrown into – and then fried alive in scorching palm oil. The screams that rang out from the section of the camp where the horrible instrument of unthinkable torture was carried out, shall remain with my guide for the remainder of his existence on Mother Earth.

He never returned to farm the land, opting to remain in the big city, undertaking a vast range of jobs spread over four decades, ranging from market vendor to city cab driver. On the 27th of June, 1977, ‘M’ was informed that his wife and daughters had perished around the 12th of February 1968, shortly after the commencement of the disastrous ‘Tet Offensive.’ No remains were ever forthcoming by the authorities- and ‘M’ was never informed as to the specific causes of his family’s demise – or where they now lay – he does not possess a single photograph of those he lost.

Although he recovered physically, ‘M’ never successfully put his ordeal behind him, He told me in his own special way that men are often haunted by things that happen to them in life, especially in war. Their lives come to be normal, but they are not. From my own experiences in uniform, I would venture that a truer word has never been spoken; many of my former uniformed colleagues would unhesitatingly concur with this profound and thought provoking analysis too.

The final destination we visited was to a small wooden construction positioned atop a rather large hill that overlooked a verdant and lush valley, although a little bemused by ‘M’s’ ongoing reluctance to be photographed by me, this largely due to an almost irrational fear that his formers enemies now ran his country – the consequences, in his humble opinion, of relaying his personal story to a Westerner would be too harsh to contemplate, he therefore asked for no images of him…or that of his old French banger of a car, to be taken – his decision saddened me greatly as I had considered that a close affiliation had developed between us – yet, I respected his wishes and began to climb the grassy kop in the direction of a bamboo hut that he wished to show me.

The door to the establishment was not locked, as we entered, it dawned on me that I was inside a place of Buddhist worship, decorated with images and artifacts of religious significance, plus that of photographs of people from another time. To the right of the hut was a large window, covered with a rattan blind, the same that ‘M’ quickly rolled up in order that I may take in the incredible views on offer. 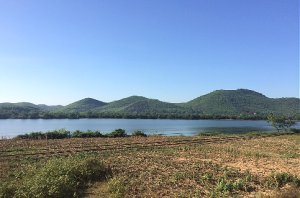 My host lit a few of the incense sticks that sat on the makeshift altar in the centre of the room, he then offered a litany of prayers to an effigy of Buddha, a very large bust that took up around 50% of the available floor space. As I gazed out over the landscape, ‘M’ emerged from his spell of prayer offering and stated that the he believed more in rebirth – and not that of the human soul as we Christians do.

In view of the fact that the place we now found ourselves in – was little more than a geographical stone-throw from his former family home, he was convinced that following the death of his kin, they returned to this beautiful place in another form – thus remaining close to husband and father ‘M’ – I so wanted to believe him. As we turned to leave the building, ‘M’ indicated that he had to roll down the blind that covered the large window, adding further that this was a very important task as he didn’t wish for those he loved on the outside, to witness the grief of he who remains on the inside – “Do you do this in yoo country mistah” he unabashedly enquired, I felt my eyes welling up and simply nodded in agreement that we too, undertake something very similar in the West.

‘M’ and I spent six days together, five longer than initially intended – covering many miles across Vietnam and southern Laos – his antiquated motor vehicle holding out comfortably for the entire journey. As we headed southwards in the direction of Saigon, I dwelt on the issue of parental loss once again – and the tragedy of not being in possession of the remains of both offspring and loved ones who are lost to us.

There existed many Vietcong prison camps that were based in Laos, the vast majority of which held soldiers and airmen who were interred in conditions equal to that of ‘M’s’ place of confinement – never to be heard or seen again.

Hitherto, there have been no final goodbyes – or regular visitations to a graveside to pay respects – to make pledges of ongoing, undying devotion and gratitude, for many hundreds of parents, wives, children, brothers and sisters who never witnessed the return of those they cherished, Vietnam did indeed become – the forgotten cemetery.