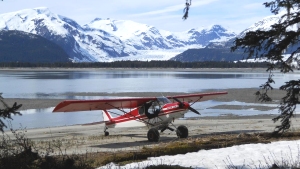 After about 4.5 hours of hard work, I had extended the gravel bar about 50 feet out into the river. The breeze had picked up a bit and I was feeling confident that I could safely depart. I would need every inch of space but with the lightened airplane, the extra 50 feet of runway and the breeze, it was time to fly!

I removed my hip waders and left them with the rest of my stuff. I climbed back into the plane and taxied back to the other end, spun it around and took a moment to settle myself. This would be the real takeoff. I needed to perfectly execute a short field take-off procedure with a couple of slight modifications. I would pull the flaps at the last moment rather than starting the take off with them deployed. That would eliminate a small bit of drag early in the take-off run. I mentally went through my procedure. Once the plane lifted off, I would immediately lower the nose to prevent climbing…barely skimming the river’s surface…holding the plane in “ground effect” until the airspeed increased. Attempting to climb at a low airspeed could result in a departure stall, falling into the frigid water of the river. Nope! Don’t want that. Just hold it in ground effect until the airspeed builds up and then slowly milk off the flaps a few degrees at a time. Fly over the river where the cold air will be denser and provide more lift.

I was ready. I tightened my seat belt, ran through my check list, and applied full power. There was no need to watch the airspeed indicator. I had flown this plane long enough to “feel” when it was ready to fly. Besides, I was committed! There was no choice! I would hold the plane on the ground until the last possible moment and then pull flaps and rotate just enough to barely lift into the air.

The plane moved along and gained speed. The end of the bar was coming up and I could feel the wings begin to pick up the load. The tail was flying. It felt good. Just as I began to roll over the newly made rocky extension I had built, I pulled 20 degrees of flaps while simultaneously pulling back on the control yoke. The plane hopped into the air and I immediately lowered the nose to skim the river’s surface as planned. I glanced only briefly at the airspeed indicator which showed about 55 MPH. I had made it!

I climbed up to 2000 feet and radioed Anchorage Flight Service, asking them to call my wife and tell her I was on the way home.

Now that I was safely in the air, how much of this story would I actually reveal to my wife… my other pilot buddies? After all, there was no one who knew what really happened but me. After pondering my options for only a few seconds, I knew I must tell the truth to my wife and my pilot buddies. It was essential to keep me humble and the community of pilots with whom I hung out would totally understand. 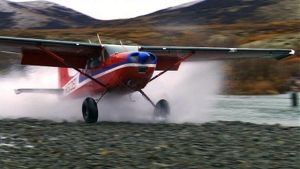 Among that group were those who had crashed their planes, a few more than once. Some had become lost and been forced to land not knowing where they were. Others had dropped off hunters and were unable to find them again when the appointed time came for pick up. There was always a story and those stories always contained lessons for all of us. This was one of my stories. I’m certainly not proud of it but it provided valuable lessons and I survived to learn them and not repeat my errors. That, after all, is what is required when flying Alaska’s bush country and I’m happy to have had those experiences for over 20 years.

Now, I’m happy to watch the sun rise every morning over the Caribbean as I sit at my computer here in Cancun updating my blog or working on another book. These days, I don’t do a damned thing I don’t want to do and answer to no one but myself…and my wife, of course!

Hell yes, I know I screwed up and I’m an easy target for criticism. However, this incident happened many years ago and I have logged many hours of Alaska flying since that day. I have forgiven myself.

I’ve always had a fondness for antique/classic aircraft. Although this incident occurred in the mid-1980s, the airplane I was flying was a 1947 Stinson 108-2 with the 165 HP Heavy Case Franklin engine. It was a wonderful plane for cross country flying but it was no Super Cub when it came to STOL performance. Had the gravel bar not been shortened by the rising water, I’d have been fine OR…if I had not allowed my ego to take control of my common sense, I’d have also been fine. I had oversized tires (8.50X6) installed with Cleveland brakes. I also had a climb prop in place of the cruise prop. I did love that plane! Among the airplanes I’ve owned were a 1946 Taylorcraft. It had the 85 HP Continental and was sitting on 1400 EDO Floats. It had great STOL performance on wheels and skis and did a respectable job on floats too. I kept it at Lake Hood in Anchorage where I installed skis for winter flying. I also owned a Luscombe 8A, Cessna 175, Cessna 172, a couple of Cessna 150s and a Citabria 7GCBC on Floats. While I didn’t own them, I also regularly flew a Lake Amphibian, a Cessna 170 and a couple of Piper Cherokees.