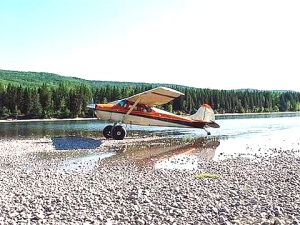 I made several rock piles along the edge of the gravel bar, marking the height of the water. I wanted to know if the water was rising or receding. Rising water would be a bad thing as the gravel bar would become smaller and receding water would reveal more dry land. There seemed to be no change for about an hour and then it seemed that the water was slowly receding! Great news for now but more rain in the surrounding hills could change that very quickly.

I had told my wife where I was going and when to expect me home. When I didn’t arrive on time, she would notify the appropriate officials and a search would be initiated. Man…I hated that!! Not only would I have to deal with making an idiotic mistake but a rescue would mean that the entire, local flying community would also know of my stupidity. I continued to discard the notion of rescue. If I could get myself out of this situation, I may be able to avoid the ridicule and ribbing that was sure to follow.

In Alaska, much importance was assigned to self-reliance. In the bush country, it was all about self-reliance. One needed to find food and stay warm during the unbelievably cold winters. In summer, one needed to prepare for winter by catching and canning fish and growing and putting up vegetables. One often needed to perform minor medical procedures such as setting broken bones, stitching wounds closed, or amputating mangled digits from chain saw accidents. Survival was one’s personal responsibility and those requiring rescue really had to be in trouble! Most folks hated to ask for help. I was no exception. I had put myself into this mess and I would get myself out!

There were many hours to go before I would be missed so I had time to find a solution to my problem. Once airborne, I would have radio contact and could relay a message to my wife. I just had to get into the air and for that, I needed a longer runway.

I needed to know how much more dry ground I needed and there was only one way to figure that out. I’d have to make a couple of runs down the bar at full power to see what airspeed I could achieve and how close to take-off speed I would get before needing to pull the power, and quickly slow before running off the end of the gravel bar. This was not science. This was the worst kind of trial and error. I knew how long the book said it would take to become airborne under a certain set of ideal circumstances but those circumstances did not exist at the moment. I paced off the distance of the gravel bar. It was too short for takeoff according to the book however I could reduce the aircraft weight and a light breeze was beginning to blow which would assist the wing to fly. 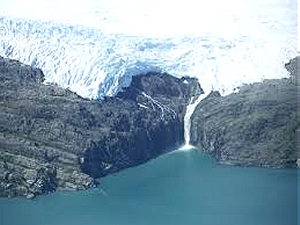 I wanted the airplane to be as light as possible. Every extra pound would add length to the take- off run. I pulled my survival gear and fishing gear from the back of the plane and made a pile off to one side of the gravel bar. I removed the back seat and added it to the pile. I removed my flight case containing my charts and plotters. I also removed a pair of rubber hip waders. I guessed I had removed a bit more than 50 pounds of weight. If I was successful, I could return later with a different airplane, one more suited for STOL operations, to recover my stuff. I drained about 3 gallons of fuel from the wing tanks (about 21 additional pounds) and determined that I had shed as much weight as I could. Time to take a run and see what happens.

I applied sufficient power and began the careful, slow rough taxi to the very end of gravel bar. The airplane lurched and staggered over softball-sized rocks as I slowly picked my way along. While the main landing gear was quite sturdy, the small tailwheel in the rear of the airplane could be damaged by these large rocks. I taxied a bit into the shallow water at the far end of the gravel bar as the swift glacier-fed waters strengthened by several days of heavy rain in the hills above, rushed over the landing gear. I depressed the left brake, added power and spun the plane around to face the opposite end of the short gravel bar, the tail wheel now under water. I would need every inch of ground available if I was to get an accurate reading on my situation.

I had piled some rocks on the edge of the bar as a marker. Once I hit that spot, I must immediately pull the power and brake heavily to stop before running into the water. However, if I applied too much braking power, the airplane would nose over, flipping onto its back. There was no other way to assess the situation. I needed to do this.

I held the brakes and applied full power. In only a few seconds, the tachometer showed peak power and I released the brakes. I pushed the control yoke full forward to raise the tail as quickly as possible. The plane began to move, much more slowly than I wanted but gained speed as the tail rose. Ten degrees of flaps had been selected to provide the wings with extra lift. I was not expecting to fly but did want to see if the airplane would feel light as the wings began to pick up the load. As the rock-pile marker approached, the airspeed indicator was showing about 40 miles per hour; not enough to fly. This plane would leave the ground at about 50 MPH. As the marker flashed by the side window, I immediately reduced power and applied heavy braking, being careful not to brake too heavily. I stopped in time at the end of the gravel bar. I knew what had to be done. I needed to build more runway! It was that simple!

I parked the plane and slipped into my hip waders. I began pulling rocks from the bottom of the river bed and piling them at the end of the gravel bar. For several hours, I worked, piling rocks as If I was a prisoner doing hard labor. But in this case, piling these rocks was my ticket to freedom. I had plenty of time to think about my screw up and working in frigid water, pulling heavy rocks from the bottom of a stream bed while bent over certainly felt like a penalty, albeit a light one. The more I worked and the longer the bar became, the happier I became. I sat and rested when I needed but realized the importance of avoiding rescue by the authorities and preventing my wife from worrying. As I worked, the enormity of my compounded errors really sunk in. I was now pretty sure that I’d get out of this okay but the fact remained that I had put myself into this potentially dangerous situation. I wasn’t happy with myself!!! Lesson learned!!!