In addition to the reduced cost of living and an improved standard of living we also had other requirements that we felt were realistic, if a bit of a stretch. We wanted a place where our better-quality lifestyle could be supported only on my Social Security income and Diane could also retire while still at an age much younger than most would consider for retirement. This would be almost unthinkable in the United States. We knew we had set the bar fairly high. 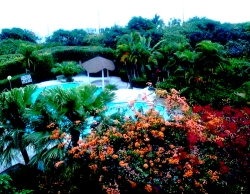 We sought a country with a stable economy and government. We wanted crime rates no worse than what would be found in many small towns in the states, hopefully lower. We liked living close to an ocean or sea so wherever we went would need to have an inhabitable coastline. There would have to be access to affordable medical care and recreation. Oh…and the climate needed to be perfect. Much like Goldilocks, we sought neither too hot nor too cold. Like I said, we had set the bar fairly high.

The Internet is a wonderful invention! In less time than you would think, Ecuador emerged as a likely winner among a small handful of other locations, many of them Latin American countries. A number of publications consistently ranked Ecuador among the top contenders for offshore retirement destinations.

While I don’t necessarily suggest this same process for others, we did enough research to confirm our comfort levels, sold all our possessions, every single thing except what would fit into six suit cases and pulled the plug. We retired to the small fishing and farming community of San Vicente, Ecuador across the bay from Bahia de Caraquez without ever having visited the country. Few would feel comfortable following our example and many would say it was foolish. Well, for many, it very well may be foolish. Having served 8 years with the U.S. Air Force and living in several foreign lands as well as Alaska, I was accustomed to the idea of blooming where I was planted and Diane fully embraced the idea with no reservations. Not once did the Air Force ever send me somewhere to see if I liked it before transferring me. If they had, I’m pretty sure I would have said “no thanks” to Vietnam! Besides, if we didn’t like it, we could always move.

Using several expat forums on Facebook and other sites, we connected with many who had already made the move to Ecuador. We sought as much information as we could. At our request, one couple arranged a condo for us to rent for one month upon our arrival. After the end of the second week, we signed a 6 month lease. We still live in the same gorgeous condo complex as when we first arrived although we have moved into a much larger unit. We now rent a 4 bedroom, 3 bath fully furnished condo (much larger than we need) with a large terrace overlooking a beautifully landscaped garden and pool with the Pacific surf just beyond. The Cost? $700 per month. There are other options in the area for around $450-$550 per month and higher.

We bought a used 4-wheel drive vehicle the second month we were here and a new Suzuki Motor Scooter for Diane shortly thereafter. Diane rides her scooter into Bahia to play tennis several times each week and volunteers to teach English at a local school.

Our housekeeper’s name is Fatima and not only does she take care of all housekeeping chores including laundry and ironing but she is also a wonderful cook! We have created a new life here with Ecuadorian friends as well as other expat friends. We attend parties and festivals and recently celebrated the incoming New Year by dancing in the streets with a pulsating throng of thousands. Our recreational life is as active as we want it to be to include surfing and paragliding from the local seaside cliffs.