Why I’m Not in Boston

I hate the snow! 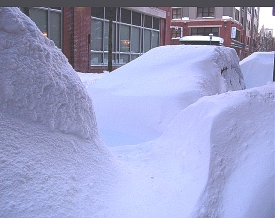 Didn’t used to be this way. In my former life, that is my life away from Arizona, winter weather and all the inconveniences that go with it were just part of the deal. We didn’t know any different. Every fall, just as soon as that familiar chill was felt in the air, you knew that distress and anxiety were just around the corner. It was time to say goodbye to the lazy days of summer and time to gear up for that bone-chilling endurance race called winter.

In late October and early November I had to make sure that snow tires were put on the car. Salt and snow shovels needed to be rounded up out of the garage. Snow boots, winter coats and mittens were collected from the back of the closet. As temperatures continued to drop and the wind chill would plummet to unbearable depths, I would sink into a funk with each passing blizzard.

Snow plows and icy roads would be the order of the day. Road reports and weather forecasts became important barometers which would assist in the decision making process of whether or not you were going to venture outdoors. Moving around outside from one place to another, either by foot or by car was a monumental undertaking. The effort it took to accomplish just the menial tasks of everyday life became an exercise in extreme patience and exacting fortitude.

Winter was all consuming. Shoveling walkways after each storm. Taking time to bundle up before going out the door. The ever mindful adjustment of walking and driving on ice and snow. The stinging cold wind on your face as you walked from the parking lot to the store. Most of your time and energy was spent preparing for, and engaging in, the brutal weather that overtook your life. You became a hostage. Winter kidnapped you. There was no escape. Spring seemed like an eternity away.
And Boston feels like this now.

Not only has it been one of the coldest Februaries on record, but an incredible 101.8 inches of snow has fallen on the city so far this winter. Winter records have been broken and the beleaguered Boston public transportation system has all but come to a grinding halt.

One resident summed it up best this way:

“Being caught outdoors on a platform in bitter weather with no train in sight. Every single homeowner is worried about what damage the ice and snow will leave behind. So many people are feeling so isolated: if you are elderly or frail or use a device for mobility, forget it. You’re stuck inside. This winter has taken such a toll on our communities.”

I don’t have any of this. Winter is a distant memory for me. It’s been a while since I’ve even stood outside and seen my breath.

To us Snowbirds, winter is a TV show, something we watch on the evening news. I’ve been coming to Arizona for the winter now for fourteen years. There is no snow to shovel. There are no icy roads. We don’t worry about how we’re going to get from point A to point B. We just go. 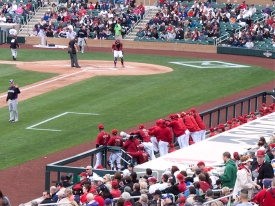 The other day I took the light rail downtown to Diamondback Fan Fest at Chase Field. I stood on the platform in shorts. The train was on time. Other than the officer coming on board and sliding our light rail passes through her handheld device to see if we had paid, the trip was uneventful. When I stepped off the train it was 70 degrees and sunny.

Soon spring training is going to start here in Arizona. The air will be filled with the sound of a boy’s game: bat hitting ball and the popping of baseball mitts. People will be coming to the Valley in droves to take in the games. It will be warm and sunny. The grass will be green. Smiles will be on everyone’s faces. Winter will be forgotten.

I guess I should feel guilty, but I don’t. The longer I go without experiencing winter weather, the more I don’t want to. I wouldn’t trade places with anybody. I like it where I’m at. I know that I’m very blessed to be here and I never take it for granted.

So people of Boston, take heart. Be of good cheer Beantown. Spring is just around the corner. It won’t be long before this nasty winter will be nothing but a bad memory.

It’s just going to take a little longer for you, that’s all.