Gustafson held various securities-related positions in the banking industry from 1960 to the 1970s.

Gustafson and his wife Wendy 'retired' in 2001 and now enjoy traveling, writing and producing documentaries and being a disc jockey on the Holly Creek Retirement Community radio station HCRK. 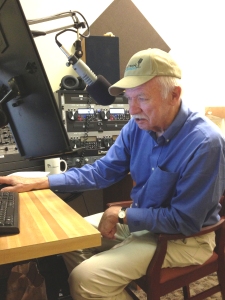 HCRK are the call letters for Holly Creek Radio, a closed circuit broadcast at the Holly Creek Retirement Community in Centennial, Colorado. HRCK provides music, live programming and daily community updates to all 300 residents in our community. The average age of our residents is 82 and that defines the type of music we play. This also means that several of our residents have sight limitations and cannot read the community newsletter or scroll updates on the TV.

That‘s where the radio station comes into service. Our broadcast begins with the Star Spangled Banner, an inspirational message given by our resident Chaplin Jim Kok, and a volunteer announcer reads the weather, the events of the day and coming excursions, over the radio, three times a day at 8am, 9am, and at 10 am.

We play old radio shows, such as Red Skelton, Bob Hope etc. We also present radio shows prepared and given by the author, such as the Broadway Musical show, the Big Band show with emphasis on special holidays such as Flag Day, July 4th, Memorial Day and Veteran’s Day. We also deliver original programming including a sports radio talk show and a comedy hour. The response and feedback from residents has been enthusiastic and positive.

Now, how did this radio station come about? When touring Holly Creek, before making a decision to move in, our hostess, Donna Nelson, asked me what were my hobbies. Wendy, my wife, jumped into the conversation to tell Donna about a big band radio program I had volunteered to perform for every Saturday over the past 6 ½ years on a station called ‘Radio Free Minturn,’ just outside of Vail, Colorado.

My passion for big band music is what brought me to Radio Free Minturn. A woman by the name of Liz Cambell was making Radio Free Minturn a legitimate station. They were pirating an airwave in the Vail Valley but Liz got the station licensed. Liz knew I have a love for big band music and a huge personal library of albums, so she put me on the air with my own show. It was a great gig. Everyone at the station was an unpaid volunteer and there were no commercials. My show had a great following of both old and young listeners. It was there that I really began to understand the power of radio.

Wendy suggested that Holly Creek should have its own radio station. After we left, Donna apparently discussed the possibility of a radio station with Jayne Keller and Jayne loved the idea.

Wendy and I moved into Holly Creek in February, 2013 and by August we had an operating, volunteer-staffed radio station, HCRK!

Our volunteers are myself and fellow residents Jack Kelly, Jack Vente, Bob Stong, Ben Casillas, Jack Hull, Norm Kautisky and Peter Sherwill (who is a staff member). You may have noticed we have a good old boys club, but we are working hard to recruit some feminine participation and voices.

I supplied my radio equipment and an anonymous donor donated money so we could secure the rest of the equipment we needed to get the radio station up and running.

We now have a goal to stream our little radio station into the other two communities owned and operated by the same organization. It was very generous of CLC to allow us the opportunity for others to benefit from our successful experiment here at Holly Creek.

Homesharing: What Happens Next?