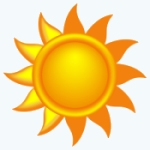 I have just returned from a wonderful two weeks in the UK. As usual, it was good to meet up with family and friends once again, as well as doing a little shopping in some of our favorite stores to buy a few of those special treats that most expats crave for. However, I also managed to pick up an unpleasant virus that meant I had to spend two days in bed in a hotel bedroom. It was all so frustrating.

I know exactly how it happened. The young man sitting in the seat in front of us on the crowded train from Gatwick Airport into London was coughing and spluttering. It was when he received a phone call from his mum and he informed her that he was on his way to the hospital that alarm bells rang. Yes, I know exactly where this particular bug came from.

As soon as I arrived home I made an appointment to see my doctor. We have a wonderful, yet small, health center in our village. It is nearly always possible to make an appointment to see a doctor the following day, and appointments are efficiently made on the Internet. After examination I was diagnosed with a chest infection, given antibiotics, and plugged into a nebuliser that helped my breathing.

It is rare that I am ill, and I am not aware of any underlying health conditions. However, my doctor made the point that a rapid drop in temperature may have contributed to the problem. After all, it had been 36 degrees on the day that I had left Gran Canaria and ten degrees when we arrived in London. I had always assumed that wearing thermals, wrapping up well and wearing gloves and a hat would be all that is needed to deal with the colder climate, but apparently it is not.

A small-scale investigation of friends who have previously lived in Southern Spain, Portugal, France and the Canary Islands revealed that many now suffer from respiratory conditions, which began after their return to the UK, even though they were perfectly healthy when they lived in a warmer climate. One couple revealed to me that their UK doctor had warned them that the body takes a long time to adjust from a warm climate to a much cooler one, and that with some people the adjustment may never take place, particularly in older people. A cheery thought.

This is an area that I have not considered before, and I suspect very few expats have either. Maybe this is something that intending expats should consider when dreaming of a life in warmer climates upon retirement? If it is their intention to return to their original home at a later time, the adjustment may be difficult and cause additional health problems. I also suspect that little research has been carried out in this area. Maybe it is an ideal subject for a PhD thesis for a medical student?

Meanwhile, I am relieved to be home again and as soon as I get these pills and potions out of the way, I can resume my life in the sun.

Motorbiking and Exploring the South of France

What to Give an Eighty Year Old Man