Motorbiking and Exploring the South of France

XSarah Hague Background:
Sarah was born near London and has a degree in Arabic & Islamic Studies from Exeter University and a Masters in European Business Administration from the University of the West of England, Bristol.

She arrived in France in 1989 on a romantic adventure and ended up staying there. After a short stop in damp and chilly Clermont-Ferrand, she headed south to the warm, sunnier climes of Montpellier where she cut her teeth as a teacher trying to instil the English language into often reluctant adults. In 1995 she was bored with teaching for peanuts so gave up and got a job in Admin at an American biological control lab.

Sarah enjoys writing and is a frequent blogger. She started writing educational resources for children with Bongo LLP in 2009, starting with the Royal Albert Hall's 'Showtime', the Teenage Cancer Trust, and Webplay, and has written two books for children. She's lived in Cairo and Dallas, Texas but prefers to stay put now in the south of France with her two boys and cat, and where she enjoys risking life and limb motor-biking as a passenger around the beautiful countryside of the region and beyond.

She is a regular contributor to the magazine BBBMidi about living in Languedoc-Roussillon.

The South of France is a fantastic place for bikers. As a passenger behind my partner on his BMW GS1200, we can go anywhere, and do anything! 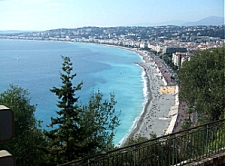 In Nice, for example, the town itself often gets busy, especially in the summer when it is congested with traffic. The bike is used as a scooter making it easier to get around. The climate on the Cote d’Azur is particularly clement, as it doesn’t suffer from the strong winds that rage down the Rhone valley or from the west into the Pyrenees Orientales.

Beyond Nice there are some magnificent roads. To find them, you’ll need the Michelin maps as they have all the roads with amazing scenery marked in green. No need for complicated plans, just follow the green!

It’s rare that the attractive roads are suitable for long-distance cruising however. The auto-routes (highways) or main National (N) roads are the ones with the least twists and turns, but with heavy goods vehicles pounding along whipping up the air, they are not pleasant to ride. 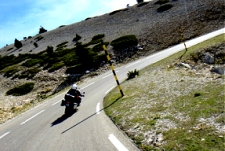 Riding from Nice through Provence you reach one of the most dramatic landmarks: Mont Ventoux. Riding up is a favorite with bikers and cyclists; indeed it is often included in the Tour de France. If you’re a keen cyclist, you’ll love Mont Ventoux! 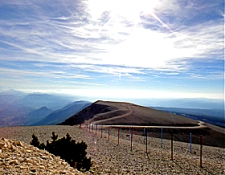 Riding back down to the coast, one of the most delightful spots is the former fishing village of Cassis. It’s now popular with tourists who like to go there on a day trip from Marseille. The road from one to the other is a popular green road with fantastic views, and you can go on, along the Route des Crètes which takes you to the magnificent viewpoint of Cap Canaille. Marseille is one of France’s major cities but suffers from problems in the northern quarters.

North of Marseille, by some 30km, is Aix-en-Provence which has a rich history and charm, some marvelous restaurants and tempting shops. It’s very well-placed for both quick exits along the auto-routes, and pleasurable outings along the green roads.

Going west, you arrive at the Camargue, a regional park and area of outstanding beauty known for its salt marshes and wide variety of wildlife. On its eastern limit is the walled town of Aigues-Mortes, a smaller version of Carcassonne. It has a definite charm, but only out of season. The coast road towards Montpellier offers views of the lagoon on one side and sea on the other, with the city of Montpellier in the distance and on a clear day, views of the local high point, the Pic St Loup. There is a wine appellation called Pic St Loup which specializes in sharp, fruity white wine.

Montpellier is a university city with a vibrant student population but it’s popular with visitors too, and those who seek to retire to a city which is not too large, but has all the amenities and excellent medical facilities they require.