What to Give an Eighty Year Old Man

My parents seldom celebrated special events or holidays, and they hadn’t exchanged gifts in years. Dad had long since given up buying anything for Mom, who was as difficult to please as he was easy. But Mom and Dad received copious gifts after moving to Portland to be near us in their so-called golden years because my wife is an ardent gift giver. 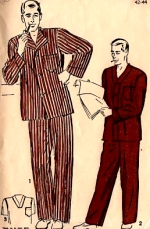 Still, Dad was difficult to buy gifts for, not that he was difficult to please; he loved everything. A jar of apricot jam, a CD of Patsy Cline’s greatest hits or a vintage aviation jacket; he was as excited as a bear handed a picnic basket.

It became a challenge to find gifts he wanted or could use. Eventually, we ran out of ideas. The year we bought Dad pajamas he was in desperate need of new ones. His current PJs had been reduced to threads and Mom didn’t shop much anymore. It’s a well-known fact that men don’t buy pajamas for themselves, especially eighty year old guys.

So my wife and I went to Macy’s and bought him a new pair. On Christmas morning his face lit up when he opened the package, careful not to rip the paper or damage the bows. “Just what I wanted,” he’d exclaimed, as if receiving a vintage ’68 Mustang GT 390 Fastback.

Weeks passed and I finally got around to asking Dad if he was enjoying his new pajamas.

But one evening I dropped by their apartment unexpectedly (it was only 6:45 and not even dark outside) and caught Dad in his old PJs. “Why aren’t you wearing your new pajamas?” I asked.

He hemmed and hawed for a moment before admitting, “I’m saving the new ones for a special occasion.”

I couldn’t hold back my laughter. Exactly what sort of special pajama-related occasion was my eighty year old father waiting for? Did my shy dad have a secret fantasy? Was he expecting a call from Hugh Hefner inviting him to the Playboy Mansion?

Dad never wore the pajamas we bought for him. Mom says he took them out of his drawer and looked at them occasionally, but he always claimed they were too good for everyday use.

Now, when I think of Dad I imagine him wearing them in heaven. No longer shy, he’s looking sharp in a playboy mansion in the sky.