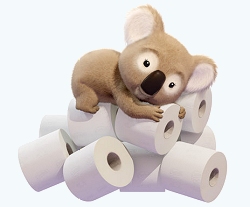 I just read an interesting statistic. The average US household uses 46 squares of toilet paper per person per day. Now based on the fact that the current US population is 313.9 million persons, that comes to about 14 billion squares per person per day – after adjusting downward for those persons who either use newspaper, corn cobs or nothing at all. In any case, it sounds like a lot of crap if you ask me.

But more importantly, my questions are these. 1. “Who does a study like this (not to mention, who pays for it)?” and, perhaps even more interesting is, 2. “Just exactly how do they do a study like this?”

On the first question – was this a government-funded survey? When I hear that we have government-funded studies on whether earthworms suffer anxiety attacks or on the number of undersized kernels on various species of hybrid corn or the one to determine what makes bowlers smile* or how far shrimp can walk on a tiny treadmill, I am far from certain that this wasn’t another one of equally useful studies. And just think, there are people who get paid to write grant applications for this sort of thing – not to mention the people (or committees) who get paid high government salaries to spend weeks or months to read and evaluate them.

On the question of how do you find out toilet paper usage numbers, I can think of several possible ways to get those statistics. One way would be to send researchers (it would surely take more than one person for this sort of job) into a person’s home to count the number of squares in each roll at the beginning of the day and then again later in the day to see how many squares are remaining. The difference, divided by the number of persons in the household (not counting any visitors or guests who use “the facilities” that day) would yield a pretty accurate number. But that is based on selecting an average household and then the question is, “When it comes to toilet paper usage, how does one determine which is an average household?”

Disregarding the problem of determining which is an average household, another way to determine toilet paper usage would be to station a researcher for twenty-four hours outside each bathroom door in the average home. (Since the average US house has 2.2 bathrooms, this, of course, would require 2.2 researchers per average home.) These persons would have the government-mandated authority to prohibit flushing before being allowed to inspect toilet bowl contents and do an accurate count of tissue usage. (This is a job that is more difficult than may first appear because of the tendency of toilet paper squares to stick together making counting much more difficult.) I also assume that flushing without authorization would then be a Federal offense punishable by a $10,000 fine or a year in jail – or both.

In any case, if you ask me, it sounds like a really shitty job but it might be one way to solve our unemployment problems.

And one other way would be to send 27-page questionnaires to a statistically representative selection of US household requiring them to answer questions about their daily toilet paper usage. But could we trust those people to give the survey the seriousness that it deserves?

Oh, and I almost forgot one last question. Who the hell cares how many toilet paper squares the average American uses? And to answer my own question, probably the Kimberly Clark Company who, for obvious reasons, is at this very moment trying to figure out how to get that number up to 49 sheets per person per day.