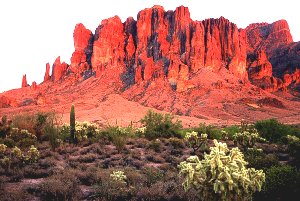 I tipped my wine glass back and the Pinot Grigio flowed over my tongue and down my throat like pure spring water. My senses came alive as I sat my glass back down on the patio table and leaned back in my chair.

Diana’s voice pierced the stillness of the moment. “Beautiful evening isn’t it.”

I turned my head slightly to the right and looked over at her. She was leaning back in her chair. Her wine glass was half full and sitting on the table in front of her. A slight smile creased her lips.

The sun had just set behind us out of our view and its fading rays were illuminating the panorama in front of us as we gazed eastward toward the desert. There, in the distance, rising up off the desert floor like a valiant battleship ready for action, was Superstition Mountain. The glow from the setting sun had spread along its face, softening its rough edges and making the giant rock glimmer against the backdrop of the darkening sky.

There’s a saying among Snowbirds here in Arizona. “When the mountain turns pink, it’s time for a drink.”

This is our favorite time of day. In fact, I’ve mentioned it on my bio page on this website. It’s a chance to relax and unwind with neighbors and friends; or just the two of us, sitting on our back patio with a favorite bottle of wine and enjoying the quiet of the evening, with the beautiful Superstitions as our amphitheater.

Anyone who spends much time in the east valley of the Phoenix metropolitan area doesn’t have to be there very long before the story and legend of the Superstition Mountains becomes commonplace. “There’s gold in them tharhills,” as they say. And that is exactly where the legend begins.

The mystery and lore surrounding the Superstition Mountains started with the Pima Indians from which the mountains got their name centuries ago. Signs of their once active presence can be found in the ancient cliff dwellings and caves that are scattered throughout the area. In later years, the Apaches occupied parts of the region and by the 1800s the Superstition Mountains became a fortress for the tribe.

Legend has it that a family from Mexico by the name of Peralta began mining in the area and sent several expeditions back across the border carrying gold. As the story goes, a large party of Peraltas attempted their last trek out of the Superstition Mountains in 1848 with their gold laden pack mules. They didn’t get far. An Apache ambush was waiting for them and all were killed. There is still an area today in the mountains known as Massacre Grounds.

Over the years, maps have surfaced from people who were supposed to have known the mine’s location. These maps would be mysteriously lost or misplaced whenever people started asking too many questions. Prospectors who claimed to have found the mine would inexplicably disappear in the mountains never to be heard from again adding to the lore of the Superstitions.

In the 1870s, an immigrant from Germany by the name of Jacob Waltz showed up on the scene. To the locals he became known as “the Dutchman”. Waltz was supposedly befriended by a descendent of the Peralta family and told of the location of mine. This quiet, unassuming old prospector began attracting attention by sporadically showing up in town to buy supplies and paying with high grade gold ore from his saddlebags. Waltz would never say where the gold came from nor did he ever file a claim. People would try to follow him back into the mountains, but he always seemed to lose them in the many twists and turns in canyons.

Towards the end of his life, old Jacob move to Phoenix and was befriended by a woman named Julia Thomas who nursed him for many months as he lay on his death bed with five sacks of gold lying underneath it. After Waltz died in the fall of 1891, Julia and some friends made a trek up into the Superstition Mountains to find the mine. After five weeks they came back empty handed. The mine was never found. As the years went by, the story of the mine was added to the lore of the Superstitions and became known as the legend of the “Lost Dutchman Mine”.

Numerous books and articles have been written on the subject, each with its own version of the legend of the Peralta’s, Jacob Waltz and the Lost Dutchman Mine. The different variations of the story have only added to the intrigue enticing treasure hunting enthusiasts to continue searching for the elusive mine.

Today the Superstition Mountain range is a federal wilderness area and an Arizona State Park. The area covers approximately 160,000 acres of arid, desolate landscape with numerous hiking trails and campsites within its boundaries. The Lost Dutchman State Park and the Superstition Mountain Museum, both sitting on the western edge of the base of the mountain are popular tourist areas to visit if a trip to Arizona is ever in your future.

The Superstition Mountains are many things to many people. But to us, it’s not about the gold or the Lost Dutchman Mine. It’s an escape. With the sun going down, our heads resting on our cushioned patio chairs and our wine glasses full, Diana and I, and countless other snowbirds, watch the changing twilight colors glow off of this magnificent monolith in the quiet of every evening.

The Superstition Mountains gives us a chance to forget about the complexities of life for a while and contemplate the beauty of God’s creation.

Never for me the lowered banner – never the last endeavour