The naysayers did not stop us from moving to Costa Rica

XMark Van Patten Background:
Mark Van Patten retired at age 64 and moved to Costa Rica with his first, and only, wife and four dogs. They live in Atenas, Costa Rica in a small home 4 kilometers from the center of town. Their trips to town are often interrupted to stop to give rides to their neighbors or to let the cows pass on the way to pasture.

Mark has blogged at Going Like Sixty about stuff of interest to baby boomers including retiring, moving, and living in Costa Rica.

Mark and his wife have their house for sale so they can have a larger place for her hobbies and crafts. Check it out at AtenasHouse4Sale.com 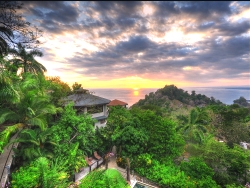 When we first decided to move to Costa Rica the reactions to the move came from two types of people. There didn’t seem to be any middle ground.

Maybe not so surprisingly they were from two demographic groups:

It was hardly your Mensa challenge for the day to determine which group was close-minded about the move. The negativity was coming from those who retired rich. They have theirs and just can’t understand why we want ours.

These were the people who were self-employed and sold the business, paid off their credit cards and mortgage and lived where they chose: close to where they were raised. Their idea of a vacation home was to move to The Villages and live next to the same people they lived next to before retirement. Or… they retired with a big pension plan because their union negotiated it – or they lived the corporate life and were banking the big bucks and were living in some gated community.

They just could not understand why we would want to move to Costa Rica, land of eternal spring-time, low crime, low housing costs, mountains, rivers, oceans, affordable and good medical care, with a government that is stable, an economy that is strong and diversified, and live around people that are educated and actually like people from the United States.

Their comments were usually really ignorant and never said to our face… “They will be back in six months”… or …” do they know anything about where they are moving?”… or … “I sure hope they don’t believe everything they are told.” In other words, because they could not fathom making such a life change, they closed their minds to the possibility that there are many more people like us loving, but leaving the United States.

The other group was the working-group (not to be confused with this breed of working group):

The people who were still working usually said something like: “well it’s not for me“… or… “we could never do it” … or… “I hope you are really happy” They acknowledged that even if what we were doing wasn’t for them, they were open-minded enough to realize it may work for us.

The following quote (from a real estate agent/tour guide), may not be a purely objective opinion but summarizes what I am talking about:

Pura vida, if you are open-minded.

If you fall into the other category maybe it is time to change your mind.

Pickleball. No you can’t eat it.