Super Bowl in My Backyard

The tension in the room was palpable. 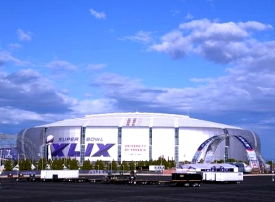 Game on the line, just under a minute to go, second and goal at the one. The Seattle Seahawks one yard away from securing their second consecutive Super Bowl championship. All eyes were on the big screen TV at the end of the room. Most were sitting on the edge of their seats, some were standing. All were mesmerized with the image on the wall in front of them. A few seconds from now would be the culmination of not only the Super Bowl game, but the end of a tumultuous two weeks of activity in and around the greater Phoenix area.

We started seeing the buildup almost from the very minute the two Super Bowl teams were determined. Local media provided us with a constant stream of wall to wall hype. The streets of downtown Phoenix were transformed into a carnival like atmosphere complete with vendors, games, and high-tech attractions for all ages. Nightly news and sports programming provided live feeds from the “NFL Experience”, interviewing people on the street and adding their commentary to all the surrounding hoopla.

ESPN started beaming Sports Center from a location next to the exclusive Fashion Square Mall in Scottsdale. The excitement continued to build as recognizable sports anchors and other celebrities filled our TV screens with analysis and commentary on the upcoming big game. Adding to the spectacle of it all, local media would get into the act by interviewing as many national sports figures as they could coax in front of their cameras.

In the meantime, in Glendale over in the west valley, the scene from University of Phoenix Stadium where the Super Bowl would be played was equally chaotic. News reports would be splashed on our TV screens of how much security was being implemented for the big game. Semi-trucks going through huge x-ray machines. Helicopters and jet fighters buzzing overhead were a common theme.

My home in Mesa sits only about forty miles from University of Phoenix Stadium. I have driven past it many times. It sits right off Interstate 101 looking like a giant, silver space ship that happened to land in the middle of the desert. It had undergone somewhat of a face-lift for the Super Bowl all decked out with big Roman Numerals along its side, a gleaming behemoth against the blue desert sky.

For those of us snowbirds, all this hype and hysteria was quite something to behold. Most of us come from either the Upper Midwest or Canada where life is a little slower. Being thrown into the middle of such an enormous event and a national story like the Super Bowl was quite exciting.

Of course, going to the game was out of the question. Reports of ticket prices of $4,500 or more were common. Those of us here in our retirement community of Las Palmas had to be content with watching it on TV. Most snowbirds don’t have that kind of money.

There is a community room in our clubhouse which turns into a party room for just about any occasion. This is where diehard football fans from our snowbird family congregate every year to watch the Super Bowl. Barbecue meat balls, Lil Smokey’s, spinach dip and crackers along with many others dishes and desserts comprise the spread that everybody contributes for the game. Beer and wine flow freely as snowbirds from all over enjoy each others company.

This year there was quite a contingent of Seahawk fans attending the Las Palmas Super Bowl Party. There are several residents in our community from the state of Washington, in particular the Seattle area. They were there in force rooting for their Seahawks. Mainly due to geography, Patriot fans were few, but there were still a handful rooting for New England.

When the Patriots jumped out to a lead in the second quarter, Seattle fans were somewhat subdued. Party goers made their way back and forth from their table to the spread of food in the back, all the while watching the game on the big screen. When the Seahawks tied it, Seattle fans were in bliss, some marching back and forth in the room waving Seahawk flags. A pall went over the room when New England scored another touchdown pulling ahead again. But just as the half was ending, Seahawk fans had something to cheer about again as Seattle tied the score with a touchdown.

Katie Perry’s halftime show provided another chance to replenish our adult beverages and fill another paper plate with barbecue.

Seattle went on a roll in the second half much to the delight of the raucous Seahawk fans. By the end of the third quarter the room was jumping with flag waving Seattle fans whooping and hollering with their team ten points ahead.

But then the tide turned. The Patriots began to mount a slow and methodical comeback and the room turned quiet with the exception of the few New England fans now cheering their team on. And when Tom Brady threw a touchdown pass late in the fourth quarter to put the Patriots ahead, Seattle fans sat in stunned silence with their flags laying in their laps.

But no sooner had all hope seemed lost for the Seahawks, when in just a few plays, Seattle found themselves at the one yard line with less than a minute to go in the game. A chance to win the Super Bowl once again. Whooping and hollering all around one more time as the Seahawk fans had new life and a Super Bowl victory in their grasp.

While the small handful of New England fans jumped up and down waving their arms in the air, the Seahawk fans quietly gathered up their stuff and slowly walked out the door to go home.

Do you think the Roman Numerals will be gone from the side of the stadium the next time I drive by?

I think they will be.

Joining the Peace Corps at 71