2006/2007: “Lassie… Age and weight are causing her to rethink her life, but she’s the only one of the three who knows and will respond to her name, presuming she feels like it.

“Boss…has no idea what a name is, much less her own…she’s a bit shy and may run away; but she gets confused and may run into you.

“Rex…you might catch a glimpse of calico looking out the front window when you arrive, but that’s about it—unless Boss slams into her by mistake.”

Boss and Henry (the Cat)

Lassie and Rex spent their days together. Boss was usually somewhere else–a different couch, room, floor, planet. Lassie and Rex died of unrelated, old-age infirmities within a few weeks of one another, which led to a remarkable change in Boss. As I wrote in my note to a new pet sitter:

2010: “Boss may hide at first. When we had three cats, she never made a sound, not a peep….Now…she whimpers and meows for food and attention, though not very loudly.”

And that, too, changed when we took her on her first car ride other than to the vet–a 900 mile drive to visit Vicki’s family. For the first two hours, Boss thought it necessary to advise us loudly and incessantly how unhappy she was; for the next two hours, she brought it up again every 30 minutes in case we’d forgotten; for the last ten hours, she was silent, having concluded that her life was over–“I won’t talk, I won’t eat, I won’t drink, I won’t…”

Boss recovered the moment we arrived at our destination, but the cat that had been utterly silent for nine years–the cat that began to whimper and meow when she lost Lassie and Rex–found her true, shrill voice, which came in handy with Henry. 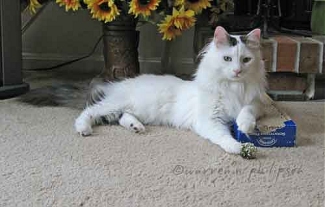 Our son Noah, by then in college, somehow acquired Henry, a sturdy, long white fur, bushy tailed cat, several months before moving to an absolutely-no-pets apartment. Of course we will take care of him, proclaimed Vicki. I had already retired; she had not.

On Henry’s first visit to our home, Boss came to greet him. “Whoa!” Henry shouted. “A furry toy.” He then pounced on her, endearing Boss to him forever. Along with care, feeding and entertaining Henry, my job was to keep them apart for a year.

And Then There Was None

We needed a pet sitter only once that year. On that occasion, we closed Boss in the basement and gave Henry free reign over the rest of the house. A day after we left, we received a call from the pet sitter. Henry-the-attack-cat wouldn’t let her into the house.

The year passed, Noah reclaimed Henry, and Boss lived her last months in peace, as I would like to live our retirement without pets, even fish. Would you like to hear about Vicki’s tropical fish, especially the pleco that earned the name Godzilla?