Vicki would like to disrupt our placid retirement with another cat. I ask you, is that fair?

Because I have always been the early riser and the one who handles cleaning duties, I have been the cat keeper…in sickness and in health, until death do they part. I fed, watered, changed litter, cleaned up after and otherwise responded to from one to three cats nearly every day for 20 years. 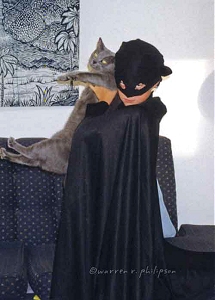 We met Lassie, our first family cat, at an adopt-a-cat affair, organized by a cat-rescue group at a local pet store. Crowded in with the store’s staff, stock and customers were cat-rescue and cat-seeking people, and cages of meowing or sleeping cats and kittens.

Amid the controlled chaos was one young, unmistakably cerebral, Russian Blue cat–the future Lassie–watching, studying, thinking; a perfect match for our 4 year old action figure, Noah. Lassie needed only one day to adopt Noah as her own before assuming control of our home.

Lassie disliked being carried or cuddled, so Vicki decided we needed a second cat. She chose a “simply adorable,” orange calico kitten at another adopt-a-cat event.

Shortly after naming the newcomer “Rex,” we discovered that Rex should have been Regina. More important (to Vicki anyway), Rex couldn’t tolerate being carried, cuddled, brushed or petted for more than a few minutes–“Oh,.I love it…more…oops, enough. I can’t take it…excuse me, I’ve got to go stare at the wall.”

Rex’s most endearing trait, besides staring at walls, was disappearing if anyone were to visit. Rex thus became Vicki’s imaginary cat. 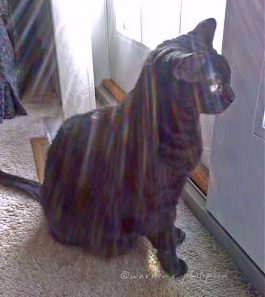 Boss was just there one day. I mean, there in our home. I remember a story about her mother being killed in a hurricane, but I don’t remember a hurricane or how the hurricane blew Boss to our house.

When Boss arrived, Lassie was already, well, large and mature. Nevertheless, Lassie would always back down from encounters with this pushy black kitten. Rex, in contrast, would never give Boss a half an inch. This established a convoluted pecking order since Lassie was best friends with, but definitely ruled, Rex.

Boss wasn’t just pushy, she was also wacky. Perhaps excerpts from a few notes I left for different pet sitters over the years will help describe the trio.

Excerpts from Notes to Pet Sitters

2004: “Lassie” (grey; charter member Feline Weight Watchers) should greet you and possibly monitor your visit, though she’s getting older, grumpier and less curious.

“Boss (black panther wannabe) may peek around a corner, disappear, reappear and disappear.

“Rex (camouflage) won’t peek around a corner or appear…We generally see her around the third Sunday in the month.”