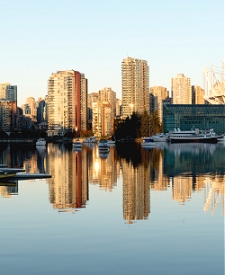 The city of Vancouver is relatively small with only about 600,000 people. On the other hand Greater Vancouver, more commonly known as the Lower Mainland, has a population of 2.5 million. It includes, among others, the contiguous cities of Burnaby, Richmond, Surrey, New Westminster, and Coquitlam, and across the harbour North Vancouver and West Vancouver. Vancouver is consistently rated among the top five most livable cities in the world. Those who live there frequently call it Lotus Land.

Greater Vancouver is dominated by mountains to the north, and to the south by the bodies of water that define its regions. Vancouver Harbour and Burrard Inlet separate West and North Vancouver from the downtown core, the West End and Stanley Park. False Creek forms the southern boundary of the downtown peninsula, and further south the Fraser River and its delta flow to the sea creating many island communities including the city of Richmond. On a clear day, if you look south, you can see Mount Baker all the way down in Washington. It’s one of the most magnificent natural settings of any city in the world. Of course being in the Pacific temperate rain forest area there is a lot of rain, especially during the winter months, but the rain makes the city green and lush. On a sunny day, and there are many of them, Vancouver is absolutely glorious.

There are tree-lined streets, beaches, big forested parks, mountains, and every kind of outdoor activity right on your doorstep, from skiing and snowboarding 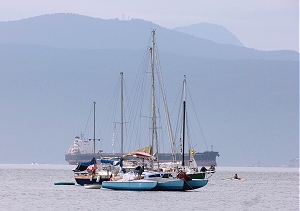 to dragon-boat racing, sailing, paddle boarding and kayaking, to wilderness hiking to urban cycling. And there are concerts and theatre and opera and great bars and cafés.

Vancouver has a diverse population. Half the population is of European descent, and nearly one third of Chinese descent. The rest? Indian, Filipino, Vietnamese, Japanese, and many others. From this rich cultural fusion has arisen an astonishing variety of restaurants featuring a cosmopolitan array of cuisines, and festivals reflecting Vancouver’s multicultural blend, such as the Indian DiwaliFest, the Japanese themed Cherry Blossom Festival and the Chinese New Year Parade. The Pride Parade, the Jazz Festival, the Folk Festival, the Celebration of Light fireworks competition, the Writers and Readers Festival, the Dragon Boat Festival, the Bard on the Beach Shakespeare Festival, the Film Festival, the Fringe Festival, the Children’s Festival, the winter Festival of Lights, the Hot Chocolate Festival, the Wooden Boat Festival, and that’s not even a half of them. There is something for everyone year round.

Coffee culture is big. Comfy seating, luscious treats, good wifi, and well-brewed hot coffee made any way you want it. There are great cafés in most parts of the city, but Main Street, Downtown, and Commercial Drive (known simply as The Drive) all deserve a special mention. 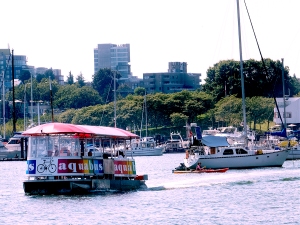 Granville Island is one of the biggest tourist destinations not only in Vancouver, but in all of Canada, attracting over ten million visitors each year. Despite the name it’s not an island. It was originally sand bars used for fishing by the First Nations people. Then later, dredging from False Creek filled in the area forming a small roundish peninsula under what is now Granville Bridge. This undeveloped chunk of land became home to factories and sawmills. After the post war decline gradually the factories and mills vacated, and by the seventies plans for a pedestrian friendly area were formulated culminating in the fabulous urban redevelopment seen today.

Granville Island is a foodies’ paradise with over seventy places to eat ranging from high-end restaurants to gourmet take-aways to cafés. There’s a public market selling every kind of food imaginable from local fruits and vegetables to artisan breads, pastries, cheeses, pasta, smoked salmon, and seafood. There’s a microbrewery, an artisan saki maker, artists’ studios, a weaving studio, and small shops selling everything from hand-crafted paper to hand-crafted hats. 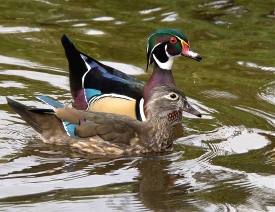 There are three theatres, several art galleries, a hotel, a community centre, a water park, and a yacht marina where you can get a whale watching or sea kayaking tour. On fine days there are musicians and buskers to rival the best in the world. And of course there’s always the water. It’s not an island but it is surrounded on three sides by the waters of False Creek plied by tiny Aquabus passenger ferries carrying people along, and from one side to the other of the creek that’s much more than a creek.