Hope Springs Eternal (For Me and the Cubs) 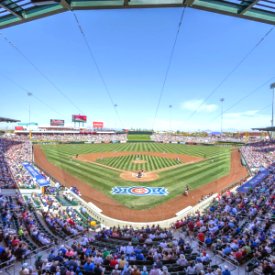 There they were! Sitting on my desk in two neat folders. Two sets of fifteen tickets. Each in three gleaming, colorful perforated sheets. It was exhilarating to see them there … next to a pile of bills, a couple of pieces of scratch paper with some scribbling and an old receipt from a recent outing at Walmart.

They had just arrived in the mail and I had opened them excitedly like a little kid on Christmas morning. The two packets sitting on my desk represented a new chapter in my retirement adventure, the beginning of a new tradition, a new way of enjoying Spring Training in Arizona.

It was the middle of February. Spring Training was just a couple of weeks away. I had always preferred to dash all around the Phoenix metro area during the month of March and visit as many stadiums as I could, taking in a variety of games from the fifteen teams that make up the Cactus League.

It was fun. It was entertaining. But I was starting to get tired of all the driving. As much as I loved baseball and enjoyed following the major leagues with all its stars and marquee players, the congestion and the crowded freeways were starting to take its toll on my psyche.

Something is happening to me. I must be getting older. I’m starting to long for a more peaceful retirement; less stress, more relaxation. With each passing year, the prospect of sitting on my back patio with my feet up and watching the sunset is more appealing to me than negotiating rush hour traffic to get back home after a game.

A perfect storm of two monumental events occurred over the last couple of years to change my outlook on spring training.

Just a short fifteen minute drive from my house in Mesa, the Chicago Cubs built a brand new state of the art facility with every amenity one could think of for the enjoyment of the baseball fan. Sloan Park replaced the old Hohokam Park which the Cubs called home for many years.

The residents of Mesa approved by ballot measure the funding of its construction and maintenance. With much fanfare by Mesa city officials, ground was broken on July 11, 2012 and the stadium opened on February 12, 2014. The Cubs new spring training stadium boasts a seating capacity of 15,000 which is the largest in major league baseball. It is fast becoming one the biggest attractions in the Cactus League. The Cubs generally sell out every home game played in the new stadium thus providing an economic boon to the local restaurants, hotels and other businesses during the spring training season.

Second. The Cubs are winning.

Last year the Cubs provided their fans with a rare pennant chase that went down to the wire. Led by eventual Cy Young award winner Jake Arrieta and 2015 Rookie of the Year Kris Bryant, the Chicago Cubs went on a tear during the second half of the season to finish the year with the third best record in baseball.

After having eliminated the Pittsburgh Pirates in the wildcard game and dispatching their arch nemesis the St. Louis Cardinals in the divisional round, the Cubs were one step away from their first World Series appearance since 1945.

Unfortunately their luck stopped there as they were swept in four games by the New York Mets.

But still, for a team that wasn’t expect to finish any better than .500 and with their history of not winning a World Series since 1908, the Chicago Cubs left their fans wanting more. As winter moved ever closer to the opening of spring training, Cub fans looked forward to the 2016 season with the hope and promise of better things to come.

All these things were rumbling around in my head when baseball season was over last fall and spring training seemed so very far away. I found out that season tickets to all fifteen Cub home game went on sale in December. But making that kind of commitment meant that I would be limiting myself to one team and one stadium most of spring training, something I wasn’t sure I wanted to do.

Then I thought of the freeways, the traffic, my patio and the sunsets … and the decision didn’t seem so bad.

I went to my first two Cub games over the weekend. The crowds are incredible. The place is packed and bursting with energy. The buzz in the stadium is exciting. And the food is fabulous. Have you ever had a Chicago dog? Diana doesn’t want to go with me to all fifteen games so I’ve got a few beer drinking buddies lined up for the others.

And I’m home fifteen minutes after leaving the parking lot, with my feet up … waiting for the sun to set.

This is the way the rest of the month of March will be for me.

Life is good in Mesa, Arizona.

Crucial Conversations, We’re All in This Together