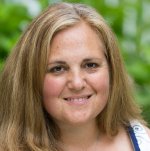 XBeth Montemurro Background:
Dr. Beth Montemurro is Professor of Sociology at Penn State University, Abington. Her research focuses on gender, sexualities, and aging. She is the author of Deserving Desire: Women's Stories of Sexual Evolution (2014) and Something Old, Something Bold: Bridal Showers and Bachelorette Parties (2006).

Please check out her web page at Penn State University, her Deserving Desires book at Rutgers Press and her Facebook page.

Through the course of research for my book I spoke with 95 heterosexual women between the ages of 20 and 68 about how their sexual desire and sexual confidence developed and evolved during their lives.

As they grew older, women experienced changing definitions of sexuality—both in their own sexual desire and their understanding of desirability of older women more generally. Because younger women are taught that looking sexy is equated with being sexy, as women grew older and age furthered them from culturally dominant standards of attractiveness which link youth and desirability, they needed to redefine things. Many of the women I spoke with realized they needed to change their way of thinking about themselves as sexually desirable to sexually desiring. And for many of the women in their 50s and 60s, being further from cultural ideals of beauty actually liberated them from caring about how others viewed them and allowed them to focus more on what they wanted, what they liked, and what they did not want or like. Rose, 65, for instance, commented, “I’m not gonna put on the war paint, you know. At that point, it’s just gonna be lipstick and whatever. And when I really, really, really, really feel confident about myself, I just feel like this is it pal, you know, this is it. Because I think that sexuality has more to do with – it doesn’t always have to be how you look, it has to be, to me, it has to be how you feel, how you interact, if you can have fun with each other. Fun is sexy.”

The most confident, sexually self-assured women I spoke with were the women in their 50s and 60s whose life experiences and relationships helped them develop confidence. Shannon, 64 and married, noted, “I think experience, just the different experiences you go through really help. Like as you survive different experiences and different times in your life you get, most of the women that I know, anyway, get more confident in themselves. And maybe not just sexually but just kind of more confident and less worried about how their behavior is gonna be perceived.”

Specific experiences like motherhood, illness, aging, marriage, divorce, and work influenced the development of sexual confidence. Had a baby? This made women recognize the power of their bodies, as well as the commonality of sexuality. Women talked of losing inhibitions as they experienced childbirth and nursed their babies. Career women? Garnering respect and having accomplishments unrelated to their bodies or sexual allure allowed women to recognize their value beyond the physical. Divorce? Women who divorced when they were in their 20s or 30s, particularly those who married during an era where acknowledging pre-marital sex was taboo, benefitted from feeling more self-aware in subsequent relationships and recognizing they did not need to settle for a relationship where they were not satisfied.

Relationships also helped develop sexual self-confidence. Women with little experience going into marriage who had partners who encouraged and appreciated women’s sexual desire and assertion helped build confidence and a sense of entitlement to sexual desire. Such women learned that, contrary to cultural messages which label women who are too interested in sex or who initiate it negatively, liking sex and seeking sexual pleasure and satisfaction could be a good thing. In contrast, partners who felt the opposite, whose focus was on their sexual needs, stifled the development of sexual self-confidence.

As women build confidence and have the chance to reflect on their own desires, as they age and recognize the physical power of their bodies and what those bodies have allowed them to do, they become grateful for what they have. They start to appreciate rather than disparage their bodies. They see their capability for sexual pleasure and, as adults, free themselves from controls that limit desire. Desire no longer only follows desirability. Women cultivate it and feel sexually appealing when they accept and take pride in their accomplishments, relationships, and selves. As women embrace themselves for who they are, they can act on their desires, their interests, rather than focus on pleasing others. Women who feel their worth no longer feel like they should change for someone else or are preoccupied about others’ views of them.

I asked interviewees if they thought older women (ages 50+) were less in touch with their sexuality than younger women. Most women in their 40s, 50s, and 60s, said no, because older women know themselves much better, they are more self-aware and likely to act on their own interests rather than what they think partners or men in general want.

Of course, some older women still had insecurities about their desirability, but more communicated self-acceptance overall. Some un-partnered women lacked affirmation from marriage or relationships and thus had more motivation for personal self-discovery. Yet, several noted that although they hoped to find a partner in the future, they would do so only on their terms and would be content with themselves if that did not happen. As Jacqueline, a separated, 44 year old woman, commented, “There’s no one in this world that can tell me I’m not beautiful because I am beautiful. And it’s not a conceit thing, it’s a secure thing. I love every inch of my curves, my hips, my rolls, everything about me. And if you are a male and you’re coming into my life, if you can’t love those things about me, move on, I’ll find someone who will…. I can be me and I don’t have to pretend to be anyone else but me with anyone. So whether I have a partner or not, I’m fine.” Earlier in her life, Jacqueline’s focus was on her husband and his desires and trying to find ways to pull back on her sexuality. As she moved into this next phase of her life, single for the first time in more than 20 years, she appreciated herself for who she was and would rather be on her own than with someone who did not accept her as is.

Overall, confidence increased as women aged. And as confidence grew, sex became more gratifying and satisfying. Whether through validation in relationships, careers, or recognizing embodied power through aging, illness, or motherhood, when women accepted themselves and stopped focusing on pleasing others, they pleased themselves.

Hope Springs Eternal (For Me and the Cubs)