Have You Ever Kissed the Blarney Stone? 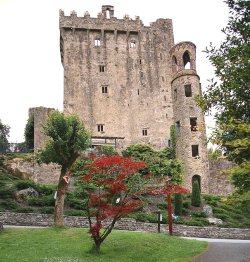 My legs were aching as I trudged up the slippery stone steps.

The enclosed spiral staircase, dank and claustrophobic, ascended one-hundred and twenty steps up to the top of the ancient castle. It was proving to be more of a challenge than I had anticipated.

Occasionally I would thankfully step aside and lean against the rough stone wall, while a band of giggly twenty-somethings, their voices echoing throughout the tunnel, bounded upward past me. Then after a few seconds I would wipe my brow, pull myself away from the wall and take another step up, another step closer to my date with the Blarney Stone.

Diana and I had booked this two-week tour of Ireland, (a bucket list “must” for both of us) almost a year ago. A week earlier we had landed in Dublin after a long overnight flight and was greeted by our smiling and enthusiastic tour guide Alan. A short bus ride with the rest of our tour group to our hotel began a three day site seeing splurge of Ireland’s capital city.

In the morning of day four, we climbed up the steps of our motor coach, driven by our smiling and equally enthusiastic driver Ian, and headed south to see the rest of Ireland. After two nights in Waterford and a tour of the Waterford Crystal factory, our tour proceeded on. With Irish music playing on the bus and sightseeing stops along the way, we came to the “Holy Grail” of all Irish tourist stops, County Cork and Blarney Castle, the home of the Blarney Stone. 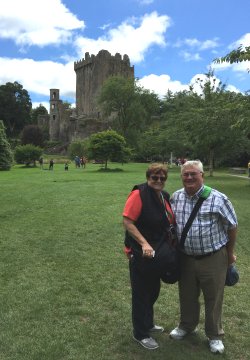 Without fail, every trip ever made by an American tourist to Ireland has been accompanied by the question upon returning home. “Did you kiss the Blarney Stone?” It was something you just couldn’t pass up.

That is, if you can get up those steps.

The Blarney Castle dates back to the 1200’s when it was built as a medieval stronghold by the Irish MacCarthy dynasty. Different families have owned it over the centuries and descendants of the present ownership operate and maintain the castle today.

Built into the battlements at the top of the castle is the “Stone of Eloquence” or better known as the Blarney Stone. According to Irish folklore, the stone is believed to possess special powers and is able to bestow upon anyone kissing it with the “Gift of Gab.”

But kissing the stone is not just a casual brush of your lips against a wall. Oh no. Back in the day, visitors were held by their ankles and dangled upside down over the side of the wall. Now, thank goodness, there is a railing you hold onto as you lie on your back and lean over backwards with the help of a guide. Still, no easy task for an overweight senior citizen from America.

Seeing daylight up ahead I carefully made my way up the stairs and came to the first level that opened out to a view of the surrounding countryside. The Blarney Castle sits in the middle of sixty acres of beautiful gardens, parklands, arboretums and waterways and the view as you work your way up to the top is stunning. 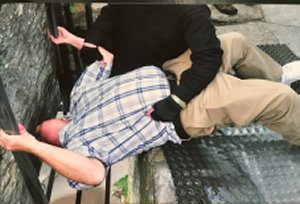 Back into the narrow staircase I went and cautiously made my way up to the next level. I couldn’t believe how slick the steps were and I had to be really careful with each step. I guess after a thousand years of use, they would be slippery. The stairway was narrow, we were told, because it made it harder for any medieval intruders to draw their swords.

After each level, I think there were four, there would be another chance to take a breather and feast on the gorgeous view of the surrounding area. Each stop was more breathtaking than the previous one as I got higher and higher.

Finally, after what seemed like forever, with sweat pouring down my face, I finally reached the top and once again was spellbound by the view. I made my way to the back of the line which was winding its way around a walkway at the open top of the castle.

Looking down over the side of the wall I spotted Diana sitting on a bench and we exchanged waves. She had told me long ago that she wasn’t about to try to make it up those stairs.

The line moved surprisingly fast and soon it was my turn. In a rather sing-song fashion the guide, a middle-aged Irishman, instructed me to lie down on my back on a pad as he held me by my side. With some difficulty I was able to lower myself backwards onto the floor. Still in his Irish, sing-song fashion, (he probably did this all day) the guide had me grab onto the iron railing behind me and push with my feet as I planted a big kiss on the “Stone of Eloquence”.

Are Old People Their Own Worst Enemies?

It’s not what you get, it’s what you do with it…