December 11, 2019 |  Category:   Retirement locations, Travel  |  2 Comments
Author:   Somer  posts:  2    Author's   bioXSomer Background:
Currently Somer and her family live in the city of Gold Coast Australia. Somer has also spent many years living in Fiji. Somer's first trip to Fiji was in 2009 for a family holiday with her Husband and two daughters. Little did she know it was a trip that would set the path for her family's future. A spur of the moment decision to move to Fiji 'to experience another culture' resulted in the family having lived as Australian expats in Fiji on and off . During that time, Somer and her family have gained a thorough understanding of the local culture, and she shares her family's experiences through her blog.

You can also reach Somer via email. 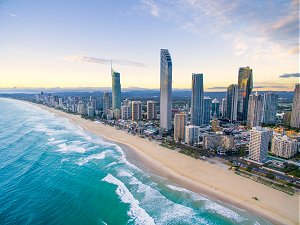 “The Glitter Strip”, “The GC”, “The Goldie” – these are just a few of the Aussie slang names for the Queensland city famous for it’s 57km strip of sandy beaches. Roughly an hour’s drive south of the state’s capital Brisbane is the Gold Coast.

With over 13 million visitors each year, and a population of 570,000 permanent residents (2019), the Gold Coast is Australia’s fastest growing city.

When you google ‘vacation gold coast Australia’ you get roughly 39 million results. Where do you start?

Let’s make the information overload of google a little easier to digest with a guide to the Gold Coast for vacationers.

The city of sunshine 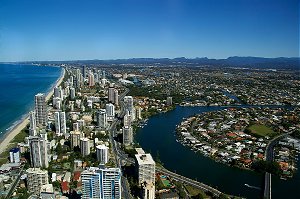 For a city whose average days of sunshine per year is 300, it is no doubt that Queensland’s largest non-capital city is on the bucket list of travelers worldwide.

Perhaps what is most surprising though is that the age of visitors is fairly even from 18-65+, which indicates that the location has a lot to offer everyone, across all demographics.

Without doubt the Gold Coast’s showpiece are it’s beaches, including the world-renowned stretch of sand at Surfers Paradise. Surfers flock to the beach for it’s famous waves, and tourists go to feel the electric buzz at the heart of the GC where the buildings seem to grow out of the sand. 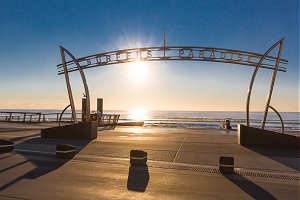 In contradiction to the pulsing beat of Surfers Paradise, just down the road at Burleigh you’ll find a chilled-out, trendy parkland beachfront where families and foodies share space, with picnics and easy access to hip dining spots, acai bowls and take away fish and chips – all with spectacular ocean views. Keep heading south and you’ll come to Tallebudgera where young children and retirees splash around in it’s protected waters, keeping company with stand up paddle boarders and kayakers.

Taking a break from the sand, you’ll find a booming culinary vibe, an exciting cultural and art scene, Australia’s 4th largest shopping mall, glitzy nightlife and the largest concentration of theme parks in the southern hemisphere. 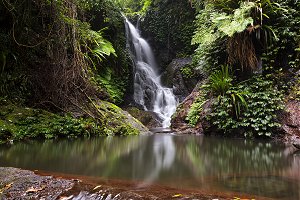 Not to mention there is 100,000ha of nature reserve and World Heritage sites – a large part of which is subtropical rain forest, so the bush-walking lovers can explore as much Australian nature as their time permits.

Not yet familiar with destination Gold Coast? Perhaps these moments will jog your memory:

Since 1965 these scandalously dressed ladies have strolled the streets of Surfers Paradise paying expired parking meters for visitors to the strip. Wearing skimpy gold bikinis and tiara’s, vacationers to the GC have lined up to take photos with the Gold Coast icons for years. Cost: donation for a photo 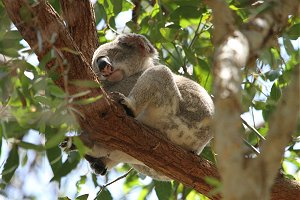 You can’t come to Australia without holding a cuddly koala bear. Illegal to do in most of the country, a visit to Currumbin Wildlife Sanctuary – a heritage listed zoological garden means you’ll also see kangaroos, lorikeets, and other native species at the world-class reserve. Entry: Adult $40aud (approximately $27 US)

Has Elvis Actually Left the Building?

Sometimes referred to as Australia’s Vegas, due to it’s glitzy style and exciting nightlife, it’s fitting that the Gold Coast is also home to a unique Elvis Presley museum. Housing special items belonging to the man himself – a TV remote from his bedroom, curtains from Graceland, the original script of Flaming Star, and a watch from Jailhouse Rock – any Elvis fan would be intrigued. Entry Fee: Adult $25aud (approximately $17 US)

Head out for a sunset ride along the bike-friendly foreshore from Main Beach to Burleigh. Early riser? Start with a morning walk along the boardwalk at Surfers Paradise and take in the scenes as the glitter strip comes to life. End with a cappuccino at one of the beachfront cafes. Stunning views come free of charge. Cost: Bike Hire from $35aud (approximately $24 US) for a full day

Airport: Gold Coast has it’s own international airport, located at Coolangatta – the south end of the Gold Coast, and a 30 minute drive to Surfers Paradise, where you will find hundreds of accommodation options from budget options to luxurious ones.

One of Queensland’s largest clinical teaching and research facilities is located at Southport – Gold Coast University Hospital. Ensure you have medical travel insurance to be covered for treatment.

The Bumpy Road of Life