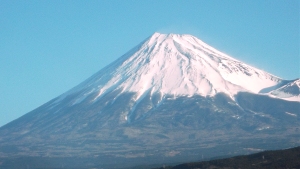 For our sixth anniversary we booked a very inexpensive trip to Nagoya the fourth largest city in Japan. It is only 1 hour and 40 minutes by bullet train from Shin-Yokohama.

For tourism the city offers a lot to see and of course to eat. Nagoya is famous for tasty Tebasaki (chicken wings), Ebi Fry (very large Shrimp), Miso Katsu (Pork filets soaked in a special miso sauce), Hitsumabushi (Marinated and barbecued eel), Miso Nikomi (Boiled miso broth with Udon noodles) and top it all off with Uirou (Japanese sweets).

We purchased an all day train/bus pass for 600 yen ($5) and rode the subway, 25 minutes to the Toyota Auto Museum. If you like cars even though it is a little out of the way, it is well worth it. The display included many old American, European, and Japanese autos. I even learned something new about Ford Motor Company. They built the original Jeeps (GPW) used in World War II and began auto manufacturing in 1927 in Yokohama, Japan. There is even an auto library, which contains 11,000 books and related magazines. This is a car lover’s paradise. They had a 64 Mustang that looked brand new and a sporty Lexus that was one of only four made in the world. There were Model T’s, Tuckers, Mercedes, Rolls, and the first electric auto made in the early 1900’s. The museum is spacious and well lit. 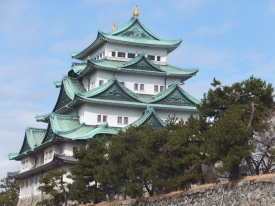 Our next stop was Nagoya Castle built in 1610. On previous trips I have visited 15 different castles, this one was partially destroyed during WWII and in 1959 restoration was completed,. In it’s early history there were many fires and as a result you will see statues throughout the castle and grounds of the Kinsachi (a mythical animal that summons water to prevent fires). Each castle I have visited had something unique and at this one was a very large garden area. While walking we encountered a historic performance by several daimyo lords with large drums. Although I am not very good with the language, the performance was self-explanatory. I enjoyed it along with the other spectators.

Lunch was at a nearby restaurant for the famous Kishimen flat noodles.

We boarded another bus to the Nagoya TV Tower for a 360 view of the city. Just below the tower is the spaceship shaped building called Oasis 21. On the roof was flowing water and at the bottom an ice skating rink.

For Supper we ate a Nagoya traditional meal at a restaurant in the Lucent building across the street from our hotel. The meal consisted of Miso soaked pork filets, Chicken wings, Chicken in spicy sauce, and various veggies.

Today we traveled to Ise (The most sacred area of Shinto), Futami and Toba. In Futami we walked to Meoto iwa (Wedding rocks). The rocks are joined by a heavy (over a ton) rope, which is changed out several times a year in a special ceremony. 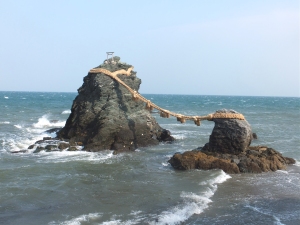 The rope is made of rice straw and the larger rock represents the male and is symbolic of marriage. Nearby is the Okitama Shrine, which is dedicated to food goddess Miketsu. You will see many frog statutes in the area.

In the small city of Toba we had reservations for Misora Restaurant. Miwa found the restaurant while searching the internet. Even though it is out of the way, the food was excellent. It is owned by Okumura-san along with his sister who helps during the weekends. Our purpose was to experience the famous shellfish type Lobster. They served lobster sushi, fried lobster, lobster in egg soup, and finally we cooked lobster in a special sauce at our table. It was all very good. As we were waiting for the bus to take us back to Ise we found a gift store, which had everything including lobster soup, crackers and even lobster chips. This area is also famous for it’s beef, on the same par as Kobe beef.

Back in Ise we visited the Naiku Shrine. It was so crowded with thousands of people. This shrine is dedicated to the sun goddess Amaterasu-omikami. There are over 123 shrines in the Ise area and this one is the most visited. The grounds were very large with many different buildings. When we left we walked along the historic Oharaimachi street, filled with food and souvenir shops.

Back to Nagoya and a Tantanmen dinner at a restaurant along Ramen alley in the train station.