Early Memories of the Bronx, NY 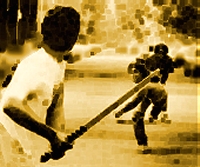 All the names of the streets in our neighborhood were named after Revolutionary War heroes or events. We lived on Rochambeau Ave; the next street over was De Kalb and a nearby cross street was Gun Hill Road. Other streets were Kossuth and Kosiusko. You get the idea.

Eventually I became fast friends with six other kids in the neighborhood. All of us lived in the same kind of apartment complex and all within a few blocks of each other. Our group was “our gang” but surely not in the same context as the gangs of today.

Growing up was a rather simple routine of going to school and playing after school. Most of the time we played in the street and most of our games were organized to use the “facilities” that were available in the street. Down the center of most streets spaced about half a block apart were manhole covers that allowed sewer workers access to the sewer system. For us they became home plate and second base when we played stickball. First and third bases were scrawled in chalk at the opposite curbs midway between home and second. Our bat was a broom stick and the ball was a “spalldeen” – a rubber tennis ball without the fuzz made by Spaulding. (It was years before I knew that’s what we were talking about when we said “spalldeen.” And by the way, the ball didn’t come that way without the fuzz. We converted ordinary fuzzy tennis balls by laboriously scrubbing them back forth on the abrasive side-walk.)

In those days of street games, one’s prowess as a ball player was not measured in anything as sophisticated as a batting average. Instead, you were measured by how far you could hit the ball. I was the three-sewer hitter, which was considered somewhat above average. Another game we played was referred to as “stick ball against the wall.” We’d find a blank spot on the side of one of the apartments and we’d draw a batter’s box on the wall in chalk. The batter stood alongside this box while the pitcher stood in the middle of the street and threw at the box trying to strike him out. If the batter was successful in hitting the ball we scored the first floor (on the apartment house across the street) a single, the second floor a double, etc. Naturally the people in the building across the street were not especially happy to have us using their building as the outfield.

Things to consider before retiring overseas