Early Memories of the Bronx, NY

The first memory I have of coming to the Bronx, NYC is the day we drove – we had a car in those days – to the Bronx for my parents to look at apartments. 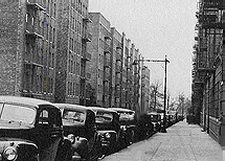 I didn’t really know what was going on. My cousin San – who it turned out lived only about a mile away – met us at the apartment. He stayed with me in the car while my parents and grandparents were up in the apartment with the manager. After a while he got bored and left to walk home. I remember being OK for a while but as the time dragged on, I got increasingly lonely and bored and I remember crying for them to return. Of course they eventually did and perhaps it was only a half an hour but to a little kid it seemed like forever.

I have no memory of the packing or the moving that must have happened to get us to NYC. But I guess I was still too small to understand the significance of the move. After we had been living there for about a year and a half, I asked my grandma, “When are we gonna move back home?”

I do remember my first day of school – first grade I guess. It was about 3-4 weeks into the semester and I was given a seat in a classroom full of kids who already knew each other. The kid behind me was a red-faced kid – I remember his name to this day – Jerry Schwartz who was continually laughing. Of course I thought he was laughing at me and I was very uncomfortable. Then the teacher gave us a spelling test. It went like this. “Apple. My mother gave me an apple for lunch. Apple.” I was soon way behind the other kids in doing the exam. They all seemed to have plenty of time while I just didn’t have enough time to write my answer. It was quite a while before I discovered that all I had to do was to write the word “apple.” I was trying to write the whole thing, “Apple. My mother gave me…etc”

I remember walking to school and one day for the first time I became conscious of a billboard for a brand-new Chevrolet. The price was $400 I think.

Another memory was the day my grandfather took me downstairs to the front of our apartment building where some kids were playing a ball-against-the-wall game called King. He introduced me to them and asked them to teach me how to play. I would have been too shy to do that myself. We began to play and that was the start of getting to make friends in the neighborhood.

I guess it was a middle class neighborhood. In NYC at the time that consisted of six story apartment buildings shoulder to shoulder to each other. Here in California you are familiar with the same sort of arrangement except that the apartment complexes rarely are over two stories. Of course there were no such things as swimming pools or recreation rooms. As a matter of fact, only the newer apartment houses had elevators. In over half of them you walked up to your apartment, even if it was on the fifth floor.

The first apartment we lived in was quite large compared to the average. It had two bedrooms, one bath, a large living room, a dining room (almost unheard of at the time), a kitchen and a long wide hallway that was useful for playing. (Several years later after we had moved into a slightly smaller apartment, that apartment was divided into two smaller ones.)

We had had a small cocker spaniel while in New Jersey. It soon became apparent that city life and apartment living was not working for Sherry and the decision was made to take her back to the place where she had been bought. I was heart broken and I remember sitting under the dining room table holding her and crying.

Things to consider before retiring overseas