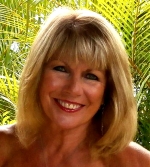 XCarole Connolly-Shaw Background:
Carole was born and raised in Brooklyn, New York, graduated from SUNY at Cortland with a degree in physical education. She moved to St. Thomas, U.S. Virgin Islands where she taught school. In the 1970s she left for San Francisco, where she was hired as an international flight attendant. She has been a world traveler ever since and is now living as an expat in Costa Rica.

Check out Carole Jean's Capers website. You can also reach her by email.

Pura Vida was his sign-off on his Match.com profile. Pura vida? What did this guy from Montana know about Pura Vida? If he hadn’t signed off that way, we never would have met … or should I say re-met? 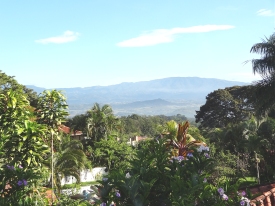 What, exactly, does Pura Vida mean? Literally translated it means pure life. Costa Ricans use it frequently for many different reasons. The first time I visited Costa Rica in 1989, I was told to use it often. It never failed to break the ice or bring a smile to the face of the receiver. I learned it meant many things – rather like Hawaii’s “aloha”: hello, goodbye, I like you, have a nice day, relax, everything is just fine, nothing we can do about it, lucky us, things could be worse, life is good, enjoy life, life is short – eat dessert first!

Pura vida brought us together; pura vida keeps us together. Shortly after our first date, we discovered we had known each other twenty-two years prior; he was my dressage horse-riding instructor in Santa Cruz, California, but due to his strict “no dating student” rule, we didn’t connect on a romantic level. Looking back, the timing would have been off anyway; we each had adventures to pursue which, at the time, would not have been compatible.

According to his profile, he was looking for a woman who would be comfortable living in Costa Rica. I had mostly given up on finding an age-appropriate man to share life with, and was on the verge of deleting my profile and moving to Costa Rica, where my parents live, to pursue my writing aspirations.

One little “Pura Vida” changed everything!

Our first date ignited a whirlwind romance! We set about building a life together as baby boomer newlyweds starting from scratch. Due to a variety of circumstances, we were both free and clear of all stateside obligations, and both collecting social security. He suggested we could live nicely in a town called Atenas, on our combined income. I said he was crazy, based on the price of living in Nosara, Guanacaste, where I spent most of my Costa Rica time.

We booked our flight and started exploring options. The first stop – “El Sueño de Mariana”, the magical spot built as a family home, but evolved into an elegant retreat. We drove from San Jose to Nicoya, the capital of Guanacaste, and the last big town before turning onto the dirt road for the one hour drive to Don and Micki’s palace. I suggested we buy supplies in Nicoya as they would be cheaper than Nosara. He said: “Can’t we just buy fruits and vegetables at the Farmer’s Market?”

“What Farmer’s Market? There is no such thing in Nosara.”

He looked astonished. “In Atenas there is a big outdoor market every Friday where you can get your whole week’s supply of food for under $20.”

“Ha!” I answered, “For $20 you might get a pineapple and a couple of avocados! Okay, maybe that’s an exaggeration, but it is NOT cheap there. When’s the last time you went to this so-called farmer’s market in Atenas? I think you’ll be surprised to see today’s prices. You’ve been reading fairy tales on the internet.”