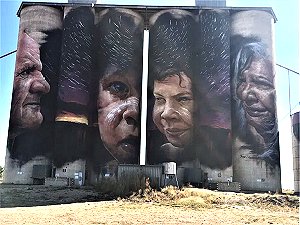 The night sky represents elements of local dreaming and the overall image signifies the important exchange of wisdom, knowledge and customs from Elders to the next generation.

The artist, Adnate, seeks “to shine a spotlight on the area’s young Indigenous people and highlight the strong ancestral connection that they share with their Elders.”

It was very late afternoon by now, but we did fit in one more, as it was just fifteen minutes further north at Brim. 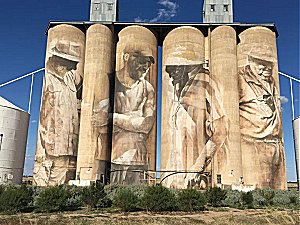 This mural by Guido van Helten was the first in Victoria and depicts “an anonymous multi-generational quartet of female and male farmers”. The detail on all of the artworks is amazing, as you can appreciate in these couple of close-ups. I also love he has mimicked the colour of the area.

You can find more on the murals by typing “silo art trail” into your preferred browser. There were several others further north, however we discovered we’d left our search for accommodation too late in the day, all the motel rooms being taken up with itinerant regional workers and service providers, so we had to rejoin the main western highway and overnighted in the small town of Dimboola.

After the day before’s slow start we had a stern word with ourselves, so that by 8.30 the next morning we were already 10klm (6 mi) out of town for our first stop of the day, the Pink Salt Lake.

This is a small, circular, shallow, salty lake which gives off a salmon-pink hue determined by the amount of recent rainfall. It was distinctly pinky-white on the morning of our visit. You can walk across the lake, and someone had been here having fun scooping up layers of salt. 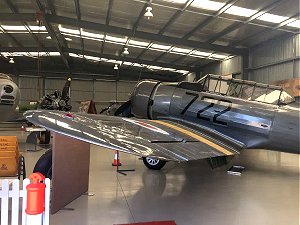 A short drive on brought us to Nhill, home to the Aviation Heritage Centre which “commemorates the existence of the RAAF Base and WWII air school” established in 1941 as No2 ANS (air navigation school). It went through several other name changes before closing in 1946. Approximately 12,000 young men and women trained here before being sent on to assist in the war effort.

The Battle of Britain in 1940 left Britain with a serious shortage of trained and experienced pilots. As a result, the British Commonwealth Air Training Programme, or Empire Air Training Scheme as it was often called in Australia, was established. Its aim was to provide 55,000 pilots, aircrew and staff each year, drawn from many countries of the Commonwealth Empire.

In Nhill, the main training aircraft were Avro Anson, Wirraway (I think it is called a Texan in the US), Tiger Moths, and Links. All of these are now on display at the Heritage Centre, open on weekends, and other days by appointment. Even though the facility was closed on our visit, we were able to peer through the hangar entrance and get some reasonable photos. The Wirraway is easily identified by its round coping on the fuselage and its single propeller, whereas the Avro was twin-engined. The Tiger Moth, being a biplane, is also instantly recognised. 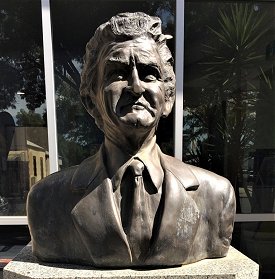 Any thought we would reach Adelaide that day were thrown out the window as we continued our dawdle along the Western Highway, with a brief stop in Kaniva, to meander in a shop that specialises in puppets, and then across the border into the South Australia town called . . . Bordertown. This is the birthplace of one our favourite Prime Ministers, Bob Hawke, known for his larrikinism. For example, when Australia won the America’s Cup Yacht Race in 1983 he exuberantly claimed, “Any boss who sacks anyone for not turning up today is a bum.”

After visiting the small museum dedicated to his memorabilia, we got off the beaten track for lunch at the Old Mundulla Hotel, a country pub dating back to 1884, close by the Moot Yang Gunya Swamp, an eco area of Red River Gum forest and other native flora and fauna. The weather was magnificent, just the kind that brings out snakes to sunbake, so we decided against walking off our lunch there.

Travellers gain half an hour crossing the border between Victoria and South Australia, but we decided against a hard drive dash to Adelaide, and finished our day at Keith.

Keith is grain growing territory, particularly lucerne, although previously this area was known as the ninety mile desert. It owes its existence to a scientific scheme in the 1940s which made the land productive by adding trace elements, and a financing scheme which enticed farmers. There are several outdoor exhibitions showing how those early people lived in Wiles huts: two prefabricated steel motor garages joined by a covered walk way.

That pioneering farming heritage is also remembered with a Land Rover; although why it is elevated on a high pole I cannot explain. 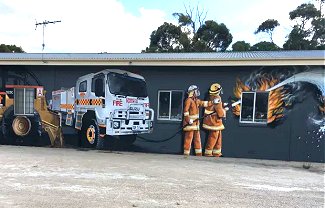 If you are in Keith though, I recommend a drive past the Country Fire Service depot. The mural which stretches the full length of the depot, depicting the volunteer fire fighters grappling with a blaze, needs no explanation.

We covered approximately 1430km/895 miles during the first 6 days of our road trip.