Never foreseeing just how serious the world-wide pandemic would become, we set off on what was intended to be a three-week road trip in early March of this year.

My journal started with a light-hearted entry, “Australians have coped with extended drought, water restrictions, unprecedented bush fires, flooding rains, and the threat of cyclones, but the thing that has brought them undone is the fear of running out of toilet paper during the Corona Virus crisis.

So my husband and I have risen above the pandemonium and headed off on our latest road trip. We’ve abdicated our responsibility to join the rush to stock-up, and passed that on to the owners of the motels at which we will stay en-route.” 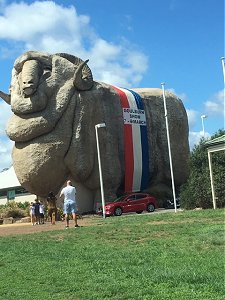 Since it was late morning when we left our home in Wollongong, we were ready for lunch by the time we reached Goulburn about two hours down the Hume Highway (M31 toll-free). After the arrival of the First Fleet in 1788, this regional town was one of the first inland settlements and for a long time before the gold rush was the extent of European settlement in colonial times. It is still an important pastoral area, as boasted by the “Big Merino” which greets visitors as they enter town. We headed on to Albury (New South Wales) for our first night. This is twinned with Wodonga (Victoria), as they each straddle opposite banks of the Murray River, which forms the border.

Our next destination was Ballarat, in regional Victoria. This stunning city in the Central Highlands has a population of approx 100,000, and is remarkable for its two main central boulevards: Lydiard and Sturt Streets. In 1837 Balla Arat was a sheep run. Within months of the discovery of gold in 1851, there were 20,000 migrants. 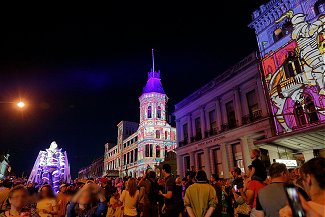 A decade later, there were 60,000, mostly itinerant and living in canvas tents close to their mine lease, but in the town itself, many of those more settled were establishing businesses and wooden houses. It is amazing testament to them, and the wealth created by the gold, that within twenty short years, substantial grand stone buildings were erected, and these beautiful buildings along Lydiard Street still take centre stage of the ambience of this city.

We had two reasons for coming to Ballarat. To see the Begonia Festival display, which we’d last seen on our honeymoon thirty-four years earlier, and to meet John, a fellow blogger.

All tourism is enhanced when a local takes you under their wing to show you their city. John called for us around 5pm, armed with an itinerary he’d prepared, and for the next couple of hours we went all over, taking in the beautiful architecture, including a quick whizz around the historic Craig Hotel, then onto the many statues and monuments lining the centre of Sturt Street, the railway station, and the old gaol (now university buildings). 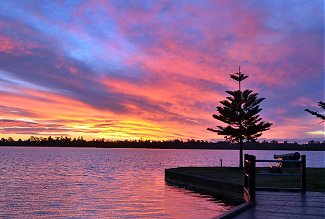 Further afield, we went to Lake Wendouree (site of the rowing/sculling for the 1956 Olympics) with the Botanic Gardens beside it (location for the Begonia festival). Nearby are memorials to those who have fought in conflicts dating back to the Boer War; the Avenue of Honour arch, the Prisoner of War wall of names, and a touching new statue of the grieving mother whose son did not return.

Our last call before dinner was to the Old Cemetery. Last time I was here was for family history purposes. This time, John pointed out the headstones listing those who fell in the Eureka rebellion, both those on the government side, and those who were “rebels”. In 1854, the goldminers, many of whom had political backgrounds, rose up against the absolute authority of the United Kingdom, and their high taxes. The miners swore allegiance to the flag of the Southern Cross and barricaded themselves behind a hastily-built stockade. Although the battle was brief and lethal, ultimately it was a victory for the miners in court and was one of the key steps to Victoria instituting male suffrage in 1857 and female suffrage in 1908.

Then John showed us something only a local would know. Sometime in the 1950s, many of the gravestones that once marked the graves of Chinese were re-used as edging and paving stones on the cemetery paths. You can just make out some of the inscriptions, worn down by foot traffic and the elements. Quite a shock when you realise what they are.

Thirty-four years ago my husband and I were on a road trip for our honeymoon (a 5000klm / 3100mi road trip is bad idea for a honeymoon, by the way) and that is when we discovered Ballarat for the first time. The tourist office suggested we go see the Begonia display. We weren’t gardeners, and all I knew was that it was a small red flower you grew in a plant pot, but we went along with the recommendation.

What a display! So many varieties, some the size of a dessert plate, and a wide range of colours. That visit has stuck with us all these years, and finally we returned. We didn’t realise that the Begonia Festival dates back to 1953. It has taken many forms over the years. Now it is a three-day carnival event attracting around 60,000 people, held in the grounds of the extensive Botanic Gardens.

For the festival there were dozens of market stalls set up for handicrafts, children’s activities, community organisations, and food and coffee stalls, strung out along the length of the gardens in between the trees and garden beds.