Presentations were taking place in a centrally-located marquee. We sat in on a cooking demonstration by Anushka Zargaryan who’d been a 2019 contestant in Masterchef Australia. Armenian by birth, she describes her cooking as a fusion of Middle-East and European, drawing on cuisines from Iran, Russia and Armenia. She cooked caramelised eggplant stuffed with a mixture of ricotta, sour cream, walnuts, various herbs and spices, lemon juice, and probably something I’ve forgotten*. I’m a fan of eggplant, (aubergine), so that may get a try-out if I ever get cooking again. * And the key ingredient I forgot was – POMEGRANATE! 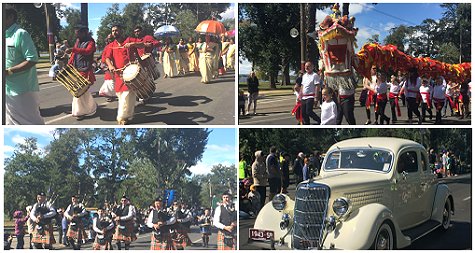 The next day we returned to the gardens to watch the colourful street parade. The Ballarat Tramway Museum is next to the Botanical Gardens, so after the parade we wandered down there for a look. When Ballarat trams stopped running in 1971, volunteers stepped in to preserve their memory, and a section of track beside Lake Wendouree was retained for their use. The oldest in the fleet is an 1887 horse-drawn.

The next morning, after a slow start to the day and a leisurely breakfast, we checked out of our home of the last three nights and got on the road again, heading north-west towards our ultimate destination of Adelaide in South Australia.

An hour down the road, we stopped at Ararat so that we could visit the Gum San Chinese Heritage Centre. This museum documents the story of Chinese gold-seekers, mostly from Canton – now Guangzhou – who came to Australia in the hope of working off their debt to the Chinese sponsor who had put up their fare, making their fortune, and returning with riches to their family.

By the 1850s, antagonism against Chinese gold miners was rife. In response, the Victorian government established a levy on shipowners – Ten Pounds for every Chinese person landed in that colony. This was about the same amount as the passage. To avoid paying, the shipowners disembarked their passengers in Robe, South Australia – the closest port to Victoria – and told them the goldfields were only a short walk away.

Almost five hundred kilometres (310 mi) and three weeks later, the first group of trek survivors camped in a valley where they stumbled across alluvial gold. As a result, effectively, Ararat is the only city in Australia founded by the Chinese. 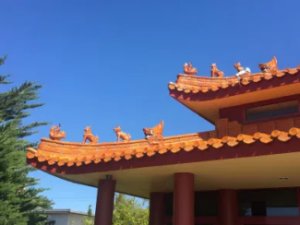 This museum relives their trek and explains the challenges of their life in this strange (and somewhat unwelcoming) land. There are also exhibits of Chinese cultural items – the photographs of foot binding are confronting! Visitors can also climb to the roof for expansive views of the Ararat surrounds, and to see the roof tiled in traditional style. We spent about two hours, and could have lingered longer.

Another half hour drive and we pulled up in the small regional town of Stawell. This is the home of a three-day festival of elite athletic racing, activities and family entertainment held over the Easter long weekend. The main event is the Stawell Gift, Australia’s oldest and richest footrace, run on grass over 120m (395 feet) up a slight gradient.

After leaving Stawell, we decided to take a detour and head north, to follow the Silo Art Trail. This is an outdoor art gallery, a celebration of rural communities – six small Victorian towns spanning 200klm (125mi) are linked by mural paintings on disused silos. 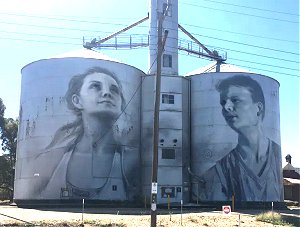 The first was at Rupanyup. This artwork features local sporting team members, Ebony Baker (netball) and Jordan Weidermann (Australian Rules Football). The artist, Julia Volchkova was born in Siberia. The mural was unveiled in 2017.

The next town up the road, Minyip, was the filming location for exterior scenes in the television series The Flying Doctors, representing the fictional outback town of Coopers Crossing. The hotel, the garage and the Flying Doctor base are still recognisable. 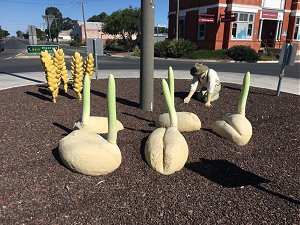 Like many small towns, Minyip has only one roundabout, right in the centre of town, and this one is decorated with a rural scene. Minyip is in the Wimmera region, a rich grain-growing area, so the wheat sheaf is a no-brainer. My best guess is the other sculpture is a germinated wheat seed.

There are six silos on this art route, and it was late afternoon by this point, so we decided to see one more at Sheep Hills (twenty minutes north of Minyip) before finding a bed for the night. Just before we reached the silo, we were stopped by a mob of sheep being herded across the road – but we didn’t see any hills. The land is flat and wide and the silos visible from a long distance away.