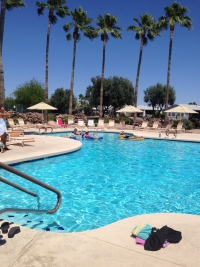 The water brought us cool relief as we floated aimlessly in the pool. It was the middle of April and nearing the end of another fantastic year at Las Palmas, our winter home.

We were engaging in the late afternoon ritual of soaking up the Arizona sun while holding court in the middle of the pool. Seven or eight of us were floating in a small circle, idly chatting and occasionally reaching for our beverages which were perched on the side of the pool within arm’s length.

We floated there, suspended in the water with the sun on our faces, contemplating another return north for the summer.

“When are you going home, Ross?” I asked, as I looked in the direction of my friend from Canada on the opposite side of the circle.

“The seventeenth,” came the quick reply. His arms dangled over the bright orange tube in front of him. “I hate to leave, but we have to get back and start on our yard work. Gotta get the place ready for summer.” He was facing the sun and he squinted as he smiled in my direction, water dripping from his hair.

“How about you?” asked Susan; a woman from Seattle who was on my left. A big purple hat shaded her face as she turned her head and looked over at me, her arms wrapped around the yellow flotation tube in front of her. “When are you guys leaving?”
“Oh, not until early May” I replied as I leaned back and paddled lazily with my right hand, reaching for my blue mug on the edge of the pool. “We’re in no hurry to get back.”

The words hung in the air for a moment. 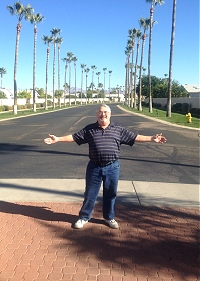 We all had just spent the last six months away from our northern homes, away from our immediate family, away from the place that had been the center of our lives prior to our retirement. For some of us, these past six months had been just another of many winter visits made over the years, our annual ritual of leaving the cold and coming down to the desert. But for others it had been their first. All of us floating in the pool that day were contemplating our inevitable return north. Transition was in the air.

For those of us who do it, who leave every fall and return in the spring, it is like having two distinct and separate lives. And the two are seldom blurred.

Think back to when you first left home after you graduated high school and went off to college. You lived in new surroundings, you made new friends and you established a new routine. Your life became different. It became settled. It became yours.

You still had ties to your home and your family, but at the same time you were creating bonds and connections with another place, another group of people – another life.

This is what it’s like to be a Snowbird.