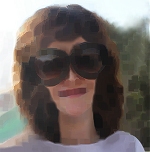 XBrenda Carson Background:
Recently retired elementary school teacher trying to adjust to retired life and enjoying every minute of it. Especially my grandsons.

Six years ago, when my first grandson arrived, miracles began to happen. The first miracle, of course, was him– a perfect, healthy, brown-eyed bundle of joy.  Another miracle was the way his birth transformed our entire family, affording us all new hope after suffering trauma in the past, and more recently, loss of extended family members.

But the other miracle was that it made me, his grandmother, shed years.  Before his arrival, I recall that I was feeling old, stuck in the same, boring routine, and, frankly, deteriorating physically as a result of overeating, under-exercising, and, of course, just naturally succumbing to the aging process. I was beginning to wrinkle, sag, and droop.  I was spending too much time sitting–in the car, by my computer, and on the couch in front of the T.V.–crocheting, playing Scrabble on the iPad, or devouring bowls of ice-cream. In truth, I was depressed about aging. I couldn’t bear catching glimpses of myself in mirrors or store windows.  And I couldn’t bear the thought of turning sixty that year.

And then, there he was, my first, perfect little grandson.  He was sweet. He was lovable. But he wasn’t exactly what you’d describe as an easy baby who sleeps a lot, eats, and coos. He demanded undivided attention and energy at all times. And I was very anxious and eager to be the best grandparent I could be, which meant that I would have to put my cares aside and focus! It’s not like I was called upon that much, but when I was, I found I needed unlimited energy.

I rocked him, swayed with him in my arms, walked with him in the stroller for hours (even in the pouring rain, under the awnings of a local shopping center). When he wasn’t napping, we’d be playing for hours on end: ring- around-a-rosy, roly-poly, you name it. Much of the play demanded I sit on the floor to be on his level, and this was not easy for my aged body, and for my back, in particular, which would require heating pad ‘therapy’ and long, hot baths to work out the kinks in the evenings.

I began to consider signing up for Pilates and Yoga for stretching and strengthening. I realized I needed some revitalization and restored flexibility in order to be at my best for my grandson. I started walking outside, too, two miles around a track a few times a week to restart my ‘motor’ and get my circulation going again. In the winter, I would use the track, walking like crazy to ‘Lady Gaga’ on my I-pad and feeling like a young teenager wildly dancing to “I was born this way, hey!”

The strangest thing about it was that I found I could easily tolerate the exercise, as everything I was doing was with my grandson as the focus—to become as youthful as I could so I would be able to meet his needs. And with him as the focus, I didn’t tire; I was inspired.

I also began to pay more attention to the food I’d consume, eating more fruits and vegetables, fish, and only whole wheat bread or pasta. I wasn’t as hungry as I was before; the happiness and pride I felt over having a grandson was so gratifying and ‘filling’ that I no longer had to use physical hunger as an excuse to fill an emotional void.

With time, it became easier to accept my age and to look at myself in the mirror without negative criticism or disgust.  I was doing something good for my health and re-experiencing joy I hadn’t known in quite some time. And I was having a blast with my grandson: the joy of my life.

And then, my luck blossomed and my second grandson arrived in 2012 .  Thinking back on the day he was born, and the moment I laid eyes on him, I imagine that the sun might have shone brighter and that every ounce of any negativity in my system might have melted away. I felt lighter and younger, and assured that there truly are gifts for us in life, even if one has to wait a really long time for their ‘arrival.’

Being with my two grandsons is a constant reminder to me of what is important in life.  It is all about being one’s best to be able to give the most of oneself to others. It is not about looks, or the number of years one has lived; but about the quality of the moments we live and how we impact the lives of others. My grandsons are my little buddies; I am bonded to them and they to me and there is mutual, unconditional love and acceptance. Because of them, I keep myself healthy and as youthful as I can be. Because of them, I feel healthy, strong, and optimistic about the future.

Their arrival was my rebirth.

The Retired Expat, Statistics and Sunshine