When A Writer Retires 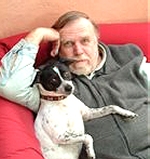 XCharles Deemer Background:
Charles Deemer was raised in Virginia, Texas and Southern California. He began his undergraduate studies at the California Institute of Technology, where he was quarterback of the 0-4 Freshman football team, and finished them at UCLA, where he received his BA (Phi Beta Kappa, Honors English). He has an MFA in Playwriting from the University of Oregon.

Deemer's play Famililly won the 1997 "Crossing Borders" international new play competition. The public television version of his play Christmas at the Juniper Tavern won an ACE award. Three of his short stories were selected to the "Roll of Honor" in Best American Short Stories. His novel Dead Body In A Small Room was a finalist for ForeWord Magazine's Mystery of the Year award. His book Seven Plays was a finalist for the Oregon Book Award. His other books include Sodom, Gomorrah & Jones, a novel; Kerouac's Scroll, a novel; In My Old Age, poems; and A Charles Deemer Reader.

Deemer is a pioneer in hyperdrama, a term he is credited with coining. His short memoir Hyperdrama: My Obsession With A New Theater Form shares his enthusiasm for the new dramaturgy.

Check out Mr. Deemer's CDretire blog. You can also reach him by email.

What does it mean for a professional writer to retire? The question is more complex than you may realize. There are those who say that a writer’s retirement is no different from any other occupation’s retirement; employment is employment, and retirement is the end of it. Others say writers, like other creative occupations, are special and never really retire. Which is right, or at least right in my case?

I’ve been a writer for over half a century. I’ve also been a teacher, a screenwriting professor, for two decades. In June I retire as a teacher. Does this mean I also retire as a writer?

The question is complex because there are, in fact, different modes of writing. I’m not referring to content but to motivations, the mindsets and goals with which a writer approaches the craft. To my writing students, I distinguished between two kinds of writing: writing that is “outside in” and writing that is “inside out.” Outside-in writing is associated with commerce. Inside-out writing is associated with literature.

In all the arts, there always has been a tension between commerce and art or literature, something more “serious” than making money. This is as true today as it ever was. And in my half century plus of being a professional writer, I’ve seen the pendulum swing between literature and commerce from one extreme to another.

First, some definitions. Outside-in writing, commercial writing, aims to communicate. The writer knows, or better know, the audience for which the writing is directed. This knowledge dictates how and what one writes. The writer of detective fiction, or romantic teen novels, or corporate newsletters, or blogs, all write to please a specific readership. This is writing outside-in and success is measured by the size and enthusiasm of your readers, often expressed monetarily in book or article sales. Or maybe, if a blog, in wonderful comments. This is commercial writing, the aim of which is communication.

Inside-out writing, or literary writing, aims to discover truths about the human condition. Talk about ambitious! The writer looks inward, not outward, not to an audience but to his own experiences, values, secrets, demons, in order to find a way to express how people behave at their deepest, most honest levels. What does it really mean to be human today? In one way or another, literary writing is serious enough to take on this question, even if obliquely. Inside-out writing is self-exploratory, based on an assumption that if the writer is ruthlessly honest about himself, he is expressing truths about everyone, that there is in fact something called “the human condition.” His audience is universal.

In the 1960s, when I began publishing, “real writers” were aiming to write the Great American Novel, and everyone was — the commercial writer — was a hack. A literary elitism was at work. In my graduate school days, I never met anyone with the slightest interest in writing a story about vampires or in writing for Hollywood. To do so would be to sell out.

And the publishing industry was quite happy with us. Half a century ago, publishing companies were largely family affairs, who embraced the responsibility of being guardians of the literary culture. Literary novels were prestigious if they were well reviewed in the New York Review of Books or the New Yorker. If they sold only 2000 copies, that was fine, because the book could break even. All that pop lit also being published, the books that made money, existed in order to support “the real publishing” of the company, which was literary. Publishing reputations were made on the backs of literature, not commerce.

The Case of the Exploding Shoes