XDenise Glass Background:
Born and raised in Southern California USA, I have also lived in New York, Guam ,Hawaii , Seattle Washington, Germany and Portugal. My husband wanted to retire early so for one last adventure we decided to move to the relatively unknown South America country called Uruguay. I now have a blog about my life there as seen through an Expat's eyes.

Check out my Retired in Uruguay blog.

Uruguay is still a relatively unknown country to most foreigners and with a population of only 3.5 million people, it’s easy to see why. 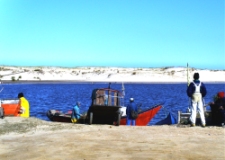 It’s a tiny country (about 68,000 square miles). Located down in South America, it borders two giants, Brazil and Argentina and sits alongside the Atlantic Ocean. It is a Democratic constitutional Republic. Uruguay, also known as ROU (Republic Oriental del Uruguay) is a relatively flat country, sometimes described as “Kansas with a beach”. It is often said, that Uruguay reminds people of what it was like living back in the USA in the 1950’s. People bicycle everywhere, without helmets though a new law is pending to require one. Families and dogs are still seen riding in the back of pickup trucks, children play in the neighborhoods and are polite. Fishing, going to the beach, camping or visiting friends and having backyard BBQ’s called, “Asados” are what people do on the weekends.

Surprisingly, though located in South America it is the least Latin country of all. Except for the fact that everyone speaks Spanish, the country and architecture is quite European influenced. 88% of the people here trace themselves back to European descent, with a quarter of the population from Italian roots. The food is not spicy here rather Pizza, meat and potatoes take the precedence over rice and beans every time. The people here are very calm, maybe it’s from all the “Mate” (an herb, hot drink similar to tea) that they drink.

The first Spanish word that I learned down here was “Tranquilo” meaning calm, quiet and peaceful. I’m originally from Southern California and I thought I was a calm, tranquil type person but nope, I was constantly being told to relax, calm down or be “Tranquilo”. So think of Uruguayans as more like Mr. Rogers than Ricky Ricardo.

People here patiently wait in lines after first getting a ticket with a number on it. If you go to the bank or a weekly farmers market held in every town, you must first look for the ticket number dispenser and grab a number, than wait for your number to be called. Everything is done calmly here.

There is freedom of religion here but unlike other Latin countries it is a much more secular country than a religious or church orientated one. There is no “official” religion here. Rather than Easter week, “the Week of Tourism” is the phrase most often used down here for that holiday week and families are encouraged to used that holiday week as a get-away vacation. There is an official holiday (by law) called, “The Night of Nostalgia” marked on calendars. It’s held on the night of August 24th, and “Rock and Roll” is celebrated that night with people partying like it was New Years Eve. The sounds of Elvis Presley and the Beattles and other classic rock songs are heard playing in English country wide during that night and you definitely have to R.S.V.P. a restaurant reservation that night.

Despite its being a “very laid back” kind of place it is also progressive. While cigarette smoking is no longer permitted in Public places, home use of Marijuana has just become legal here. Uruguay became the first country to give each school age child a free lap top computer for educational purposes. There is internet and cable TV here and great healthcare services.

Friends and family are considered more important than material things. Rather than receiving “junk mail” advertising goods, sound cars with huge speakers drive around announcing store sales and other information. There is a “Father’s day, a Mother’s day and a Children’s day” that are celebrated here and during these days local attractions like museums and historical sites are open for free. Whenever Uruguay gets a goal in a soccer game over another countries’ team, fireworks go off in the neighborhoods, even on weekdays. On Saturday nights, groups of people and teens go marching around the neighborhoods playing on drums in a tradition called candombre.

How to Tell If You Are Officially Over the Hill