Too Many Muscles to Control 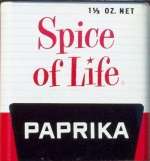 Paprika hopes that she can bring a smile to her readers’ faces while helping them learn to find the funny in their own lives.

For the past 2 years, Paprika has been writing the blog Good Humored. If you are curious about her unusual name, you’ll find the explanation (and lots of other humorous posts) there.

Paprika shares her home with three creatures who make her laugh every day: her husband and their two cats.

You can reach Paprika via email here

We were moving from side to side, jungle drum beat throbbing, Drumbellz flashing when all of a sudden the instructor yelled, “ARTICULATE!” and bent over moving her arms and legs while alternating sides. 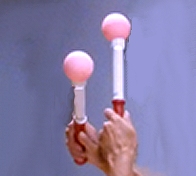 I had to stop moving to analyze her body movements to figure out how to make my body move like that. By the time I determined what limb to move and where to put it, she had called out the name of another exercise. For every 4 repetitions she did, it took me 3 to figure out how to move my body. At least I was so confused that laughing didn’t enter my mind. I was out of sync with the class. I was nose to nose with Deb when I should have been facing the wall and nose to nose to with Jen when I should have been facing forward. Behind me, I could hear Jen’s encouragement, “Just keep moving. Who cares if you are doing the right movements?”

My uncoordinated plodding continued until I heard something that made it impossible for me to control my laugh reflex. Behind the sound of the tribal drum music I heard the occasional sound of a monkey. It was at that point that I knew all hope was lost for me. I did not possess enough self-control to stave off laughter brought on by tribal drum music with monkey back-up singers.

I turned to Jen and whispered, “Am I hallucinating or did I just hear a monkey?” She smiled back at me and nodded her head while keeping up with the exercise. It was all too much for me; the weird music, blinking sticks and now monkey sounds. I turned back towards Jen and said, “I’m no longer here for fitness. From this point on, I’m here for the comedy.”

The minute I let go of the idea that I was there for exercise, I began to enjoy the class. I didn’t care if I was out of step. I was dying to know what was going to happen next. When the tribal drum music turned to music you’d be more likely to hear in a Middle Eastern nightclub headlined by a belly dancer, we took out mats and got down on the floor. As I laid there waiting for the next instruction, I could hear Jen giggling softly. I titled my head back and asked what she was laughing about. “I know you are going to blog about this and I can only imagine what you are going to write,” she said.

We began our floor exercises by bridging; an exercise where your shoulders and feet stay on the floor, but you lift your pelvis up and hold it there. No coordination needed for this exercise so I thought I was in the clear. The instructor told us to move the Drumbellz under our rear ends; still not a problem for me. When she began clapping the sticks together, that was a problem. I had lifted myself up with enough clearance to get the sticks under my butt, but there was definitely not enough space for me to clap them together. Not to mention that it was risky business for me to move my arms while balancing myself in this position. There was a strong probability that I would fall over onto my side taking Deb out in the process. After quickly weighing the pros and cons of my situation, I chose to keep my sticks still. When I looked over at the instructor, she was bridging up while her sticks blinked and flashed beneath her butt as she clapped them together. Do you have any idea of the strength and balance required to control the muscles holding yourself in that position while trying not to laugh?

When we lowered our bridges, the instructor announced that we’d be doing hundreds. I hate math, but for the first time in my life I was sincerely hoping I’d be working with fractions and decimals and not doing hundreds of abdominal exercises. No luck. It wasn’t math. This new brand of abdominal torture required me to move my legs and arms in opposite directions, independent of each other. That, dear readers, is not something I am capable of doing. The instructor saw me flopping around like a fish on the deck of a ship and came over. She grabbed hold of the arm and leg on my right side and started moving them for me. That’s right. I required remedial assistance in a Pilates class. I’m just glad the rest of the class was on their backs unable to see me.

We returned to the jungle and completed our cool down. My abdominal muscles hurt, but it wasn’t from strengthening my core. They hurt from exercising the self-control necessary to prevent me from laughing out loud for an hour. After we left the studio and were out of earshot of the instructor, Jen and Deb turned to me and asked, “So, what did you think?”

Things you may not know about Long Term Care