February 13, 2017 |  Category:   Life  |  Add Comment
Author:   Dan LaCombe  posts:  6    Author's   bioXDan LaCombe Background:
Dan LaCombe is a recently (early) retired Planner from the State of Delaware (23 years). He has been active all his life and now, with lots of time yet little money, embarks on one adventure after another, as was his life’s dream. Having taken journalism and photography in college, he worked as a reporter and photographer for the Ridgefield Press, early in his career, where he wrote numerous human interest articles. Several of his letters to the editor have been published in the News Journal. He is a modern day nomad with no permanent address and minimal processions. He plans to document his adventures in order to share this rewarding unconventional lifestyle with others. 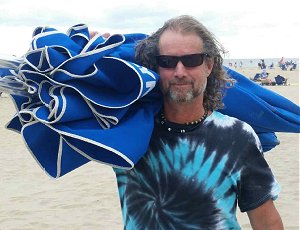 Was this REALLY how it was going to end? It was the last day of summer after all, my last day of an amazing summer, and my last day working on the beach as an umbrella boy. It was a sunless blustery day with only the most resolved beach goers venturing out! Maybe it was better this way. Another beautiful sunny sky would have made this day all the more difficult – I didn’t want this to end. I had only planted 4 umbrellas (they needed to be set deep on windy days) and put out 8 beach chairs so far, with only a few dollars of tips in my money belt – and it was almost time for my lunch break. But how could I seriously complain? I’m 56, newly retired, and steadily reminded by my customers that I surely had the greatest job in the world. Many of them work 50 weeks a years just to spend a week or two on the beach. And here I was getting paid to be here!

I had taken refuge in my umbrella shack to avoid the stinging sand attacking from the north. The waves were noisy, the shack doors shuttered occasionally, and the Phillies pre-game on the radio rounding out my auditory backdrop. The shelter was comforting as I turned the pages of The Mosquito Coast , by Paul Theroux, with great anticipation. The main character was fed up with the materialism and conformity of America so he packed up his family and boarded a freighter bound for some yet unnamed foreign land. Rejecting convention and starting a new life on his own terms. My housemate Kay had lent me this book a few weeks ago saying, “you gotta read this, you’ll love it.” And boy was she right – I felt as though I was reading about myself! I too had also (metaphorically) sailed away from the norm that had left me unsatisfied and longing for change. It was nice knowing others felt similarly, even fictional ones.

It had been an amazing string of beautiful sunny weather over the 4 weeks since Ricky had left town for school and freed up a temporary employment opportunity for me at the shack at the end of Virginia Avenue in Rehoboth Beach, Delaware. Mr. Lynam , the patriarch of umbrellas on Delaware beaches, needs people for the balance of the season. And temporary is just fine with me – it suits my lifestyle perfectly. I sense that he admires the fact that I’m doing a young man’s job at my age. He kids me about it and after Labor Day last year, he said, “I wondered how you were going to hold up.” I had had a non-stop line from 9 in the morning until 3 in the afternoon and frankly it had just about killed me, but I didn’t let on. But it was extremely satisfying knowing that I had been up to the task on that very hot day and I knew that there would likely never be another day as difficult. But heck, that’s a large part of the reason I do this job – for the work out. On busy days it feels like boot camp!

How long will we remain open I had asked him recently. “Until I’m paying you more than I’m making” he replied. And today was that day when he was calling it quits. He had started the business 76 years ago with his cousin when they were just 12 and he knows when it’s time to shut down for the season; it’s neither an art nor a science – it’s a feeling. 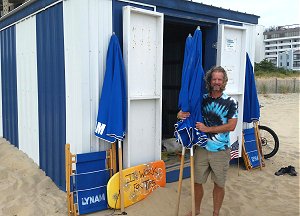 It had been three years ago that my friend Maria had told me that she took her precious two weeks of vacation time to work an umbrella shack. Work during vacation? That did not compute in my head! But she explained that you’re on the beach all day, the ocean is right there when you get hot, you get a workout hauling and setting up umbrellas and chairs, there’s plenty of time to relax, and you make good money. Well I was staring an early retirement straight in the eyes and thought to myself what a great gig this would be when I finally freed myself from a career that never really quite fit. Is this a step down in life from a 25 year career with State Government? What about Ray, the 60 year old lifeguard sitting 50 feet from my shack? He had been a Captain of a SWAT team for the Delaware State Police. You could go ask him, but do so nicely, cause he’s been trained to kick ass. He drives an hour and a half from New Castle every week to work Thursdays and Fridays. What do you think? The guards will be working one more week and when I pointed out to Chip, a 61 year old lifeguard, that it looks to be bad weather next week, he exclaimed, “Well yeah maybe but we’re on the beach!” Heck I was just trying to ease the pain of the season ending, but he really captured the whole point. It’s like the t-shirt says, “A bad day fishing is better than a great day in the office.”

I had wondered how my friends and family would react to me walking away from a good paying secure professional job, to take jobs like this and live an unconventional lifestyle. I mean here I am, with a Master’s degree, dragging umbrellas and chairs around in the sand. It’s an irony that I cherish. I enjoy the opportunity to share my story and watch the puzzlement on their faces. The most consistent reaction is disbelief that I actually did it, but it’s usually a good disbelief – shaking their heads with approving smiles. I know many people dream of doing something like this but just don’t for various reasons. It’s a leap of faith, a step into the unknown; it’s somewhat unsettling, even scary. But I’ve heard it said that peoples’ regrets on their deathbeds are generally about what they didn’t do, not about the things they did. I want to minimize those regrets.

I had always dreamed of an early retirement and planned for it, and now I was living it. I turned 55 last year and immediately walked away with a reduced pension. It’s not a lot, but combined with a retirement account that I have fed well throughout my career it’s enough. It’s enough that I don’t really have to work, but I don’t mind some structure in my life occasionally and the extra cash is always welcomed. Also, knowing that social security checks will start rolling around in the not too distant future provides additional comfort. And this job is perfect for me. For me it’s all about having the freedom to do the things I want to do and being young enough and in good enough shape to enjoy life. Time is more precious than money for sure but it doesn’t always occur to people, sometimes not until it’s too late. It’s about lifestyle and quality of life and being where you want to be – listening to that inner voice carefully.

A few rays of sun and an easing of the wind had been teasing in the late afternoon when Mr. Lynam came by a little earlier than usual to collect my money belt. The day had been very slow, so once my customers had departed and equipment collected, I was free to hop on my bike and peddle home. He asked me what I was doing next summer and if I’d like to come back and do it again. I told him that I wasn’t sure about the first part of summer but when the kids vacate their shacks a week or so before Labor Day, this is where I want to be. We shook and said good bye and I packed my belongings into my backpack – radio, towel, sunscreen, long sleeve t-shirt, and my book. I stepped out of the shack, closed its large wooden doors, secured the heavy hasp and squeezed the Master lock closed with sad click. I felt like I had locked summer safely and securely away in that umbrella shack – from where it would surely reemerge next year.