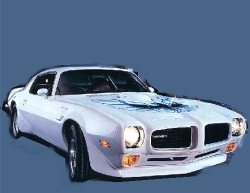 Many years ago when I was a single divorced man with few responsibilities and a fair amount of disposable income, (what a concept!) I came down with a severe case of something called covetismus automotibilus, commonly referred to as the “new car disease.” The first symptoms are an uncontrollable twitching of the eyes toward newer cars alongside you at stop lights, soon followed by a compulsion to read the automobile section of the newspaper. The more advanced symptoms are when you become addicted to something referred to as “the new car smell” and you notice yourself driving past car dealerships for no apparent reason. Unfortunately, there is only one known cure for this disease and it is expensive and not usually covered by most medical insurance plans.

Eventually my disease advanced to the point when I found myself in a Pontiac dealership (Pontiacs, remember them?) shopping for a Pontiac Firebird. A little history here – the Firebird was sort of the equivalent of a Ford Mustang – the low end model of sporty cars. Next up in the Firebird series was the more expensive Formula model and the top of the line was the TransAm which could be compared to a Chevy Corvette.

So here I am starting to look at Firebirds. The salesman and I hit it off pretty quickly and it wasn’t too long before he started talking about the TransAm and after a test drive in one of the Firebirds, he slyly suggested we try one of the TransAms. (He was one helluva salesman.) As he knew would happen, I was sold within 100 feet of leaving the car lot.

Now we sat down to write up my order. Once we got past the color, he asked me, “Do you want the up-graded mag wheels?”

I answered, “How much are they?”

He told me and I said OK.

Then he asked me about the upgraded stereo system, the better version of the air conditioning system, the deluxe comfort package (whatever that was), the fancy paint trim option, the expensive hood decal, the new safety door lock system and I can’t remember how many other upgrades and options. I agreed to every one of them – at a significant increase in price of course.

Now it is a few weeks later and I am driving my beautiful, brand new car when I notice on the dashboard a small plastic insert – the kind of thing they use to plug a hole where a switch of some kind is supposed to be. I have no idea what is supposed to be in that hole and nowhere in the car’s manual is there any answer.

But I am irritated beyond words that there is something that is supposed to be there that I don’t have. I don’t know what’s missing but I do know that I have to have it. My car is not complete. I don’t have every single possible option.

And I wasn’t satisfied until I went back to the dealership and had them install the switch that controlled a special light for the trunk – at an additional $198.76.

Question: How often did I use that switch?

Answer: Once. On the day it was installed.

So why not adopt a puppy when you retire?

You are so lucky! A reality check