She and her partner Harri have always loved the outdoor lifestyle; however, their native Wales proved too wet for year-round hiking pursuits. They are now enjoying exploring the Algarve’s diverse landscapes in (mostly) sunny weather.

In 2015, Tracy published her first travelogue, Never Too Old To Backpack: a 364-mile walk through Wales, an account of the couple’s three-week walk through Wales. A second book followed, The Via Algarviana: walking 300km across the Algarve, and eventually a follow-up, More Algarve Hiking.

Tracy writes for Tomorrow, an English-language community magazine and is a contributor to Walkingworld.com where she focuses on the central Algarve area.

The couple live near Armação de Pêra with their ginger cat Moses, so-named because they found him as a four-week-old kitten, soaked through and shivering on an Alcantarilha street.

Even the best-laid plans can go awry and so it was with us. Our house sale had been fraught with problems and the property chain ultimately collapsed. Algarve rental prices soar during the holiday season, meaning we couldn’t stay where we were: we needed a Plan B. 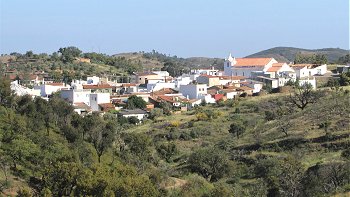 In 2017, we’d done a two-week hike in central Portugal. I’d simply listed the places I wanted to visit and Harri worked out how we could travel between them on foot (and occasionally train). We’d really liked the Silver Coast, an area about an hour north of Lisbon. Rental (and property) prices were cheaper there too. It was definitely worth investigating.

We rented an apartment in São Martinho do Porto, a popular seaside resort with one of the only sheltered beaches along the Atlantic coast. I soon learned there was a local walking group (Silvercoast Walks) which organised free, twice-weekly walks. Though the weather wasn’t as warm – or dry – as I’d have liked, it was great to explore this new region with others who shared my passion. 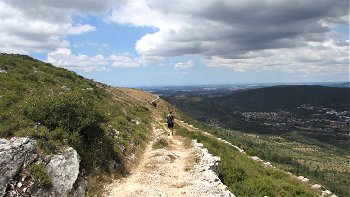 At weekends, Harri and I went for longer hikes, including in the Serra dos Candeeiros, where the scenery – and the cloudy skies – reminded us of our beloved Brecon Beacons in Wales. My only real gripes about the Silver Coast are the endless eucalyptus groves – they stifle the native vegetation and impede views – and the distance between various towns. In the Algarve, we felt we could travel anywhere on foot without needing to walk on busy roads, whereas on the Silver Coast that wasn’t the case.

Spain and the Alentejo

With our house sale still limping along, we needed to make plans for the summer months. A friend suggested we considered pet sitting and, after Skype interviews, we secured two fantastic jobs, the first looking after two cats in Órgiva, Andalusia, and the second looking after goats, ducks, chickens, dogs and cats on a small farm near Grândola, in the Alentejo.

At any other time of the year hiking the spectacular Alpujarras around Órgiva would have been a dream come true, but we arrived at the end of June when the temperatures were soaring and the most we managed to cover in one day was eleven miles. A circular walk through the stunning Poqueira gorge to visit the whitewashed villages of Pampaneira, Bubión and Capileira (4,711 feet above sea level) was a killer (it took us over an hour to walk one mile). After that, we mostly hiked at lower levels, often around the spa town of Lanjarón, where the many acequias (irrigation channels) provided relatively easy walking with magnificent, far-reaching views.

Grândola proved disappointing from a walking point of view. Despite our excitement at being back in Portugal (by now we were certain we wanted to make this beautiful country our home) and the presence of some beautiful nearby beaches, the need to look after so many animals restricted us to short afternoon walks in the surrounding woods of the Serra de Grândola and prevented us from exploring further afield.

Return to the Algarve

In the end, there was no decision to be made. We returned to the Algarve and bought our home in Armação de Pêra in November. We’re located a mile from the beach and Salgados lagoon, an idyllic spot which attracts many migrating birds, including flamingos. 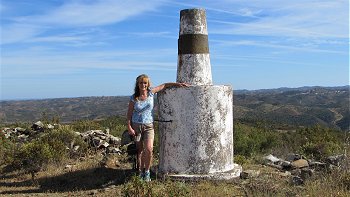 Our car sits unused for weeks as we need only to walk a short distance from home to reach sandy tracks winding through pine trees, wooded valleys with dry riverbeds, and orchards of figs and almonds. There are vineyards and cacti everywhere, plus drystone terraces. Stray a mile and we can enjoy distant views of the Algarve’s highest peaks, Fóia and Picota, where chestnut trees grow tall, and hiking has a truly alpine feel. Often, we’ll pass a crook-yielding shepherd tending his many goats – or sometimes sheep – in the traditional way.

Nearly every time we go out, we stumble upon a hitherto undiscovered footpath or track, linking places in new and different ways. Throughout winter, there was colour everywhere: the almond trees were in blossom, and wild poppies and Bermuda buttercups burst through the fertile, rust-coloured soil. By spring, the enormous variety of flora, natural and cultivated, makes even a stroll to the recycling bins a visual delight.

Moving to the Algarve didn’t happen overnight. We came and went, we explored other parts of Portugal and even southern Spain, but in the end we knew this was the place for us. The perfect spot for a hiking-obsessed Welsh couple who wanted to do the thing they love best throughout the year – yes, even in midwinter.