She and her partner Harri have always loved the outdoor lifestyle; however, their native Wales proved too wet for year-round hiking pursuits. They are now enjoying exploring the Algarve’s diverse landscapes in (mostly) sunny weather.

In 2015, Tracy published her first travelogue, Never Too Old To Backpack: a 364-mile walk through Wales, an account of the couple’s three-week walk through Wales. A second book followed, The Via Algarviana: walking 300km across the Algarve, and eventually a follow-up, More Algarve Hiking.

Tracy writes for Tomorrow, an English-language community magazine and is a contributor to Walkingworld.com where she focuses on the central Algarve area.

The couple live near Armação de Pêra with their ginger cat Moses, so-named because they found him as a four-week-old kitten, soaked through and shivering on an Alcantarilha street.

Our love affair with the Algarve began five years ago when we arrived in the southernmost region of Portugal to walk the Via Algarviana. 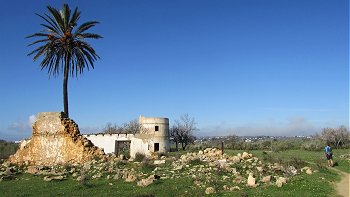 Unlike the majority of holidaymakers, we weren’t heading to the coast for a fortnight of sun, sand and Sagres (the local beer). In fact, we wouldn’t be setting foot on a beach for the next two weeks. Our mission was to walk the 186-mile trail stretching from Alcoutim on the Spanish border to Cabo de São Vicente in the west. Alas, the only guidebook on the market in 2015 was in German – and we didn’t use GPX back then – meaning we had to place our complete faith in the waymarking and just hope we didn’t get lost. 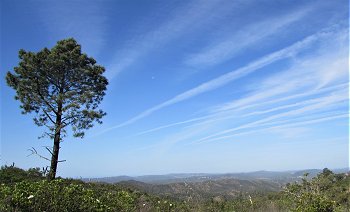 Our expedition introduced us to an Algarve few visitors get to see – a landscape of undulating hills, cork oak forests, centuries-old lanes and sleepy whitewashed villages. We backpacked, carrying everything with us and arranging our accommodation a day or two ahead (our wonderful hosts often phoned ahead on our behalf). Day-to-day life became simple: we hiked all day, often in blistering heat, and enjoyed good food and wine every evening.

I’d run the London Marathon the week before we set off, so I wasn’t unduly concerned with daily distances of up to 23 miles in blistering temperatures with virtually no shade. I was soon regretting my overconfidence. The 19-mile section from São Bartolomeu de Messines to Silves will remain in my memory forever as the day we nearly perished … from dehydration. Like many who are unused to hiking in high temperatures, we’d badly underestimated the amount of fluid we needed. Another mistake was arrogantly assuming everyone would speak English: they didn’t. 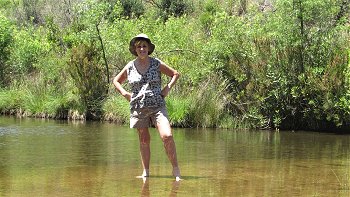 On our first night in Balurcos, the bar owner’s wife – fearing we would otherwise starve – taught us two essential words: pão (bread) and queijo (cheese).

Five months later, we returned to the Algarve to walk the Via Algarviana link routes and an alternative finish via Aljezur and the Rota Vicentina – another long-distance trail exploring Portugal’s windswept Atlantic coast.

Wintering in the Algarve

Our positive experiences hiking in the Algarve meant it was our first-choice destination when we decided to spend our first winter abroad. 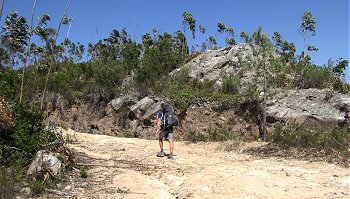 We rented a villa in the bustling coastal resort of Albufeira for three months, not really knowing what to expect but reasoning it would be better to stay on the coast where we could at least talk to people. Harri worked online on weekdays (he’s younger than me) and at weekends we would go off on overnight hiking expeditions across the Algarve, rediscovering the hills of the Serra do Caldeirão and the Serra de Monchique, exploring the spectacular coastline west of Albufeira, and enjoying the meandering historic trails and paths which crisscross the region.

The second winter we stayed for five months and never ran out of places to walk. We headed west and hiked the less populated coast favoured by surfers. 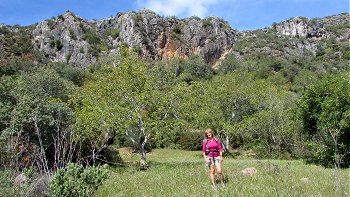 A three-day trip saw us hiking twenty undulating miles to Salir – a village in the foothills of the Barrocal region – and back and climbing the limestone escarpment of Rocha da Pena. In our local bar, we became notorious for turning up on Sunday evenings exhausted and desperate for a beer … still carrying our rucksacks.

It was always my dream to live in a climate where you could spend most of your time outdoors. Harri took a little more persuading – he speaks Welsh and loves the Welsh mountains – but in the end it was the prospect of year-round hiking which won him round. 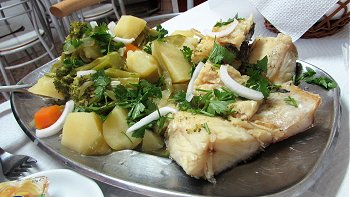 We left the UK permanently in November 2018 and spent our third winter in Albufeira, still walking miles every weekend and still catching the painfully slow Algarve trains to places farther afield like Faro and Lagos (the end of the line). We spent two weekends near Aljezur, enjoying the hiking opportunities afforded by the wild Atlantic coast and enjoying good food and music at the annual Sweet Potato Festival.

A chance encounter on the cliffs above Praia Marinha – considered to be one of the most beautiful beaches in the world – meant we now had friends in the eastern Algarve. I often hopped on a train to meet Denise and Geoff and hit the walking trails in the Ria Formosa Natural Park. Here there are no hills, just mile after mile of level walking with spectacular views of the barrier islands, salt pans and marshes, all teeming with marine birds.