Spring Training and the Ruthian

My friend sat before us like a sentinel guarding an important event. He was like I had always remembered him, regal, majestic, exuding an air of superiority as if he really knew that he belonged in this time and in this place. In fact, he truly did. March was his time to shine.

It had been eleven months since I last saw him, nearly a year since our last encounter. I was ready and eager to meet him again and renew our friendship.

We went a long way back, my friend and I, twelve years to be exact. That was when I first laid eyes on him. I’d never seen anything so magnificent. To me, he immediately became, along with the atmosphere in which he thrived, the manifestation of all that was good in the world. The pleasure, the innocence, the unfiltered joy that I could remember back when I was a little boy, running around in our backyard with a baseball and a glove, came flooding back to me when I was first introduced to my now familiar friend.

I looked at him once more, stretched out before me like a giant zeppelin lying in wait, slathered in mustard, ketchup and relish. Yes, it had been eleven months since we had last connected and I couldn’t wait to start our yearly ritual together.

I reached for my friend, picked him up with both hands and took a bite. Ahh yes! It was official now. Spring training could begin.

When we first met twelve years ago at the Seattle Mariners spring training stadium in Peoria, Arizona he was called the “Colossal Dog”. By the following year they had changed his name to the “Ruthian”, more becoming of a baseball legend – and it fit.
Babe Ruth was the most famous player of his era. He partied hard, drank hard, played hard and hit more home runs than anyone had ever seen. The Babe lived life to the fullest. He epitomized everything big. Yes, when they changed the name of this enormous hot dog to the “Ruthian” it was more than fitting. 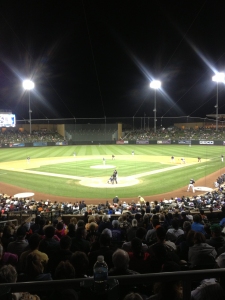 Spring Training is huge in Arizona. Phoenix and its surrounding suburbs buzz with excitement as fifteen teams, half of Major League Baseball, come to the Valley to prepare for the season. Thousands of fans follow them faithfully from the frozen North. These annual trips serve two purposes. Baseball fans get a chance to catch a glimpse of their favorite players up close and personal and in so doing; they are escaping the winter weather back home.

When I wake up every morning in March, it’s like being five years old again and waking up on Christmas morning.

I’ve been a baseball junkie since I was a tot sitting on our couch in the living room with my dad. Together we watched Bill Mazeroski of the Pittsburgh Pirates waving his arms in joy as he rounded the bases after hitting the World Series winning home run to beat the Yankees.

I’ve been hooked ever since.

The Road to Happiness