XKevin Morgan Background:
Senior Scientist Ironman Triathlete & Blogger. Carrboro, NC. Mantra: safe exercise for better health through improved mind and body awareness. Business USP: use the experience of an actively competing scientist Ironman triathlete with an abdominal aortic aneurysm stent graft to develop a safe approach to exercise for better health through improved mind-body awareness, if you have diabetes, heart disease, cancer, obesity, other health challenge, or you are simply dealing with the effects of aging

There are many benefits to be derived from staying fit or physically active later in life. I consider physical fitness to be an extension of mental and spiritual fitness, and vice versa. To exercise, or exert yourself safely and effectively, requires a certain skill set, but first let me list some of the benefits of consistent physical activity as one ages. 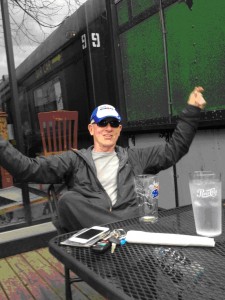 Your body will be less fragile, and thus less likely to break in response to load or during life’s little and not so little accidents. The explanation for this is provided in one of the most remarkable images I have ever seen, an MRI (magnetic resonance image) of the mid thigh region of three individuals. Study the image below. It says it all! 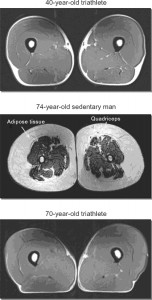 You are able to do more things. If I weren’t a strong swimmer, for instance, I wouldn’t have enjoyed the chance to meet a pod of wild dolphins up close and personal in the open ocean in Hawaii a few years ago, or to see whales in the Sea of Cortez with my youngest son, Nigel, at the Los Cabos Ironman, in which we both competed (Nigel did better than I in that one!).

You get to see lots of interesting stuff firsthand, which is far better than watching someone else enjoy it on television (haven’t had one of those life-suffocating machines for almost 40 years, thank goodness).

Early retirement is the “gap year” of the over 50s

Leaving the Valley of Confusion