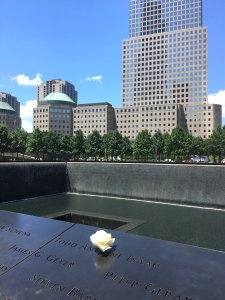 There were so many names.

My eyes scanned the sea of names etched in stone in front of me. The sound of falling water permeated my surroundings as my fingers slowly traced over the letters on the smooth surface.

I could feel the warm July sun on my back as I pulled my eyes away from the names and looked across the grounds. People, tourists were strolling around the pools, looking into the water… and touching the names.

We were at ground zero in lower Manhattan in New York City. Diana had always wanted to visit here ever since that fateful day seventeen years ago.

And here we were.

Travel plans were finalized over the internet in March. Discussions were held between us about how much of New York City we wanted to see. We would only have two days. How much did we want to pack into that short time?

Diana was adamant. We had been to New York before and we had seen pretty much all the tourist attractions. But we hadn’t been there since 9/11. This trip would focus on ground zero. 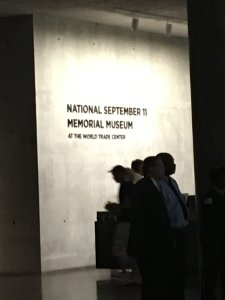 Everyone remembers where they were and what they were doing when they heard the news.

On our farm it was just the beginning of sugar beet harvest. I was driving the truck that day, taking beets from the harvester in the field and hauling them to the sugar company’s collection area, a thirty-mile round trip. It was a trip I would make over a dozen times that day.

Just as I was about a mile away from the dumping site on my second load, I turned on the radio in the truck. An announcer said that two planes had just struck the Twin Towers in New York City.

I thought it was a joke.

Just then my cell phone rang. It was Diana telling me what was happening in New York.

For the rest of the day, I was spared the visuals of all the carnage. Hauling truckload after truckload of beets from the field to the collecting station, I could only rely on the radio to guide through that horrendous day.

I never saw any footage of the horrible events of that day until late at night when I got home and sat down at the table for my supper … which I couldn’t eat.

I looked back down at the names. 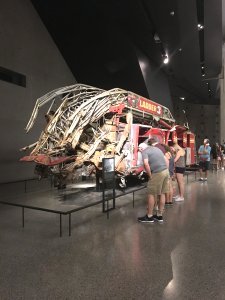 I was standing at the footprint of the South Tower, the one that was hit second, but was the first to come down. Beautiful ponds have been built at the September 11 Memorial complex, replicating the exact location and dimensions where the two towers once stood. The names of those who died, both on the planes and in the buildings are etched in smooth black stone and surround both of the pools.

Water gently cascades down the sides of the pools and falls into a smaller basin at the bottom. The sounds, the names, the solitude of the surroundings create a contemplative, almost sacred atmosphere.

Every so often we would see a white rose next to a name. Both Diana and I wondered what the significance of the rose was. We were eventually told by a passing guide that a rose is placed next to a name on the birthday of that person.

In the center of the complex is the large September 11 Memorial Museum. We spent the whole day in that building.

The journey through that museum told the story of that day. Artifacts, exhibits, footage, firsthand accounts of survivor’s stories were all there to take in and meditate on. There was even a smashed-up firetruck on display, a testimony to the destruction caused when the towers came crashing down in a cloud of dust. 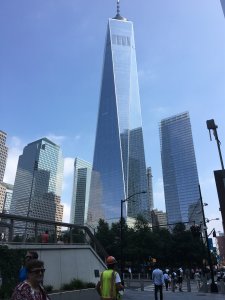 But towering over it all. like a phoenix rising from the ashes, was the new One World Trade Center. A magnificent edifice that took our breath away the first time we turned a corner and saw it.

Rising an expressive 1,776 feet into the air, One World Trade Center stood like a sentinel over ground zero affirming America’s spirit in the face over overwhelming grief.

A short elevator ride to the top offered a breathtaking three-hundred-sixty-degree view of New York Harbor and the surrounding vistas.

The Statue of Liberty, Ellis Island, the Brooklyn Bridge and the Empire State Building were all at our fingertips.

And directly below us, like two blue postage stamps glimmering in the sunlight, were the two pools where the towers once stood, a memorial to the people who had lost their lives that day.

The next morning as the plane took off from JFK and New York faded behind the clouds, it was the names – the names that haunted me.

And I suppose they will continue to haunt me … forever.

You Are Never Too Old