Retirement on the road – in New Zealand 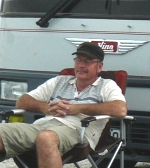 XFrederick Church Background:
Frederick is a retired film and video editor via budget advising. He currently resides in a 7 meter motorhome touring New Zealand, finding out of the way places to walk, kayak, fish, mountain bike and have fun.

Check out his Open Road New Zealand website. You can also reach him via email. 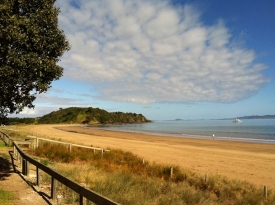 I wanted a permanent bed, there was no way I was going to be making up an bed every night and putting it away every morning. Big no. I wanted a north/south bed. There was something strange about a bed going across the vehicle. It was just plain not me. The next was an island bed for ease of making and getting in and out. Not a deal breaker as there is only one of me and I could sleep on whatever side I wanted.

I wanted to have a good size living room so that I could continue with some work if I wanted from my motorhome. I wanted to be able to have laptop, pen and tablet and space to work.

I also needed a good sized and workable kitchen. I am a person who loves to cook and bake and there was no way I would compromise on this. Also this would help with my ongoing costs, baking, cooking and freezing stuff for later. Thus a good size fridge/freezer was also on the list. 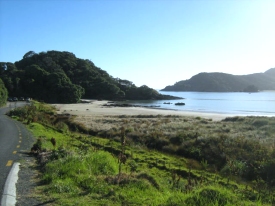 Eventually in July 2013 I found a bus that looked promising. It was in Taupo, about 2 1/2 hours drive from where I was living at the time. I contacted the owner and we made arrangements to go down and have a closer look. I gathered up the team of my sister and her husband and off we went for a look.

The bus was a beauty, a 1991 Hino Rainbow. The owner had created extra space in the bedroom by cutting off the upper rear and extending it out by about a meter. This created an interesting overhang and a space for a bike rack underneath. It also gave enough room to put in an island bed. Lots of ticks already.

The paint job was really different, two tones of grey and a white with a stylized wave along the side made for an interesting looking vehicle. Add the fact that it was taller and wider than normal gives it a very unique look. The inside fitted the bill beautifully. Two swivel arm chairs in the living area, that doubled as passenger seats when travelling, a double seater couch, which can carry two passengers as well. The sitting area converts to the dining area with the addition of the table that either sits over the couch or removes completely. The kitchen has a lovely 4 burner gas oven with separate grill. The fridge freezer is huge and there is loads of storage space. The pantry has drawers that can be adjusted to fit different sizes and is wonderful. 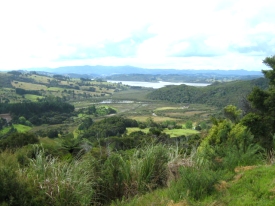 There is a separate shower and head (toilet) which was a huge plus. The bedroom has wardrobes either side of the bed and storage above and below.

There was a solar panel on the roof, 440 amp/hours of house batteries separate from the bus starter batteries, 350 liters of freshwater and 250 litres of grey/black water. So overall a wonderful bus.

So after a couple of hours and a lovely cup of coffee, the team meandered home with much discussion about what we had seen. I decided that I would put in an offer and see what the reply was. I was scared as heck when I rang and made my offer, he said that they would get back to me in a couple of days and later that evening he rang back and eventually we struck a deal at $NZ56,000. (approx. $46,000 US) I sent off a deposit and he then headed off to organize registration and Certificate of Fitness for the bus.

I now had 4 weeks to sort out my life, worldly possessions and ironically the day that all this went through my landlord contacted me to say that they had a buyer for the house I was renting. Talk about serendipity.

Where there’s a Will…

So what’s so great about Medellin, Colombia?