Pre-Retirement on the island of Cyprus 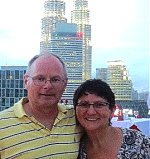 XFrank Lucas Background:
Frank was raised in The Netherlands and educated as a Chemical Engineer. After his studies he and his wife Francien left their home country in 1982 in search of some adventure. Back then they intended to return within a few years, but indeed they never did! They immigrated to South Africa where their first daughter was born in Kempton Park. In 1986 he joined an American Multinational Petrochemical company and started a 28 year International career. He was stationed in Italy, The Netherlands, four different locations in Germany, twice in the USA, Kuwait and in Saudi Arabia. The youngest daughter was born in The Netherlands but moved to Germany when she was only 2 months old. Frank and Francien have provided their two daughters with a truly international upbringing supported by an excellent global network of International Schools and communities. After a 33 year international lifestyle Frank decided to withdraw from a 24/7 active working life at the age of 57. He intends to continue his nomadic expatriate way of life together with his wife and therefore decided to move temporarily to Kuala Lumpur, Malaysia. They arrived there in June 2015.

Frank is the author of the book International Roaming: a family chasing home abroad.

You can also reach Frank via email. 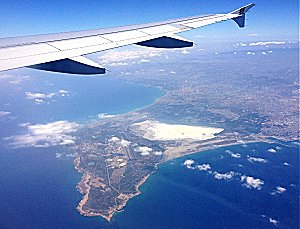 Back in 2003, while still on an expatriate assignment in Frankfurt, Germany, we bought a penthouse in Cyprus. Living a nomadic life as my wife and our two daughters have been doing for 21 years, we felt the need to establish some sort of base to go back to on a regular basis and maybe in the distant future a place to retire.

The Greek part of the Island has very good property standards, is easily reachable by air from Europe as well as the Middle East and has a very attractive climate. All were good reasons for us to go and spent our holiday there and buy this property. Since then we have spent a few weeks each year in our penthouse, gradually building new local friendships and increasingly feeling at home every time we visited.

We used Tala, a quaint mountain village close to Paphos on the western side of the island, as our home base, because we started to appreciate the excellent food and its many churches and monasteries with Byzantine silver icons, kissed by the devoted worshipers from all around the region. On Sunday mornings we can hear (from our terrace) the heavily bearded monks in their black garb sing, similar to the readings of the Qur’an by the Imams in the Middle East.

We love the laissez fair way of living here ( everything will work out at the end, but it just takes more time compared with what we were used to in Northern Europe and USA/Canada), its natural beauty and our occasional visits to its many archaeological treasures. The English language is used widely and being part of the Euro zone brings additional benefits.

Cyprus is sheltered from the chaos and insecurity of Arab countries across the water and recovering from the 2013 bail-out of its banks. Tourism is one of the major pillars of the local economy, booming once again after a few sluggish years.

It is a dry island. Approaching the island from the air, you can see the peaks of the Troodos Mountains, the rugged barren hills rolling towards the rocky coastlines with the occasional sandy beaches. On some of those beaches turtles hatch their eggs each year. 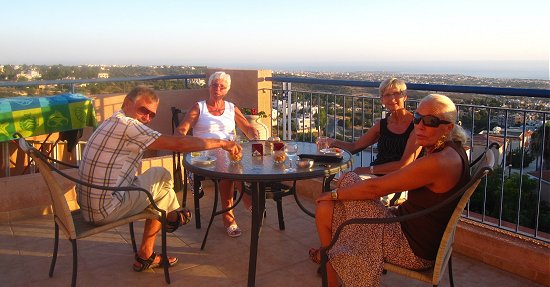 Our penthouse is perched high up the hill inside the small mountain village of Tala, with a commanding view across Paphos, Coral Bay and the sea. Driving up there you can smell the faint scent of the orange and olive trees. On the charming village square old men sip their (very strong and sweet) coffee on the terrace of the Cafenion, keeping this old male tradition all to themselves.

‘Kalimera’ I greet them when picking up my daily newspaper at the little store: ‘Yassu’ is their friendly reply.

The climate is generally mild, but in the summer the sun is blazing hot and in winter the Coptic storms carry dust and sand from the Sahara. Sometimes gusts move large satellite dishes out of alignment and a few times damaged the sun shadings on our terrace.

The combination of the favorable climate, the wide use of English, excellent health services, the low crime rate, the low cost of living and tax benefits are reasons that many retirees make this island their new home. There’s also an extensive support network for people moving to the country or those living there for part of the year.

Foreigners who have made Cyprus their new home (mainly from UK and Russia) do not live in communities in the sense of a housing complex designed for older adults, but rather independently in apartment complexes like we have and villas across the Island. The British prefer to live in the Paphos area, while the Russian make Limassol their new home.

Some of these foreigners are former expatriates who made their living working in the Middle East and beyond, forming a sub-culture within the non-Cypriot community. 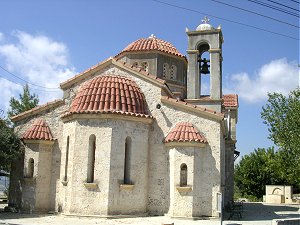 There is a myriad of social activities organized for the retiree community, ranging from sports (golf, tennis, walking, running, scuba diving), musical and theater performances, Third Age University activities, social clubs and many other interesting events. These are mostly organized by the retirees themselves and are actively supported by the local community. But most important, the retirees are part of the local community, very much integrated into the Cypriot society.

Francien and I intended to continue our nomadic lifestyle after I retired early last March, so we decided to temporarily live in Malaysia, while continuing to keep Cyprus as our beloved home base.

After all, eventually one needs a home to settle down and what other place to choose than a beautiful island in the Eastern Mediterranean Sea!