Our Softball Family: Playing Senior Softball for Fun and Health 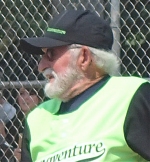 Dr. Speroff has served as President of the American Fertility Society (now the American Society for Reproductive Medicine) and was the founding President of the Society of Reproductive Endocrinologists. Dr. Speroff’s wide range of editorial activities has involved 14 specialty journals in obstetrics, gynecology, and reproductive medicine. He served as the host of the Lifetime Cable Television program on obstetrics and gynecology. Dr. Speroff is the senior author of Clinical Gynecologic Endocrinology and Infertility, now in its 8th edition, and A Clinical Guide for Contraception, now in its 5th edition. He has written the biography of Carlos Montezuma, an American Indian physician who was a prominent activist for Indian rights in the early 1900s. His latest works include the historical story of two railroads, competing with each other as they were building on opposite banks of the same river: The Deschutes River Railroad War, a journal of his rookie senior softball season: A Slow-Pitch Summer, and A Good Man, the biography of Gregory Pincus, the developer of the birth control pill.

I am so grateful for my softball family. Without them, my battle with cancer would have been more difficult, with too much time for moping and self-pity. Instead, my time was busy with the ups and downs of a sport, and the constant high of team camaraderie. The ballplayers always welcomed me, listened to my woes with sympathy, and gave me encouragement and good cheer. I found comfort in being around my teammates. Many of them, of course, had experienced their own health problems, and they understood the importance of comradeship.

Bob, one of the best ballplayers, sometimes missed games. For a year he stood by his wife’s side as she went through diagnosis, treatment, and follow-up for ovarian cancer. I told him his situation was different than one of us with an illness or bad joints, and I wondered what softball brought to him during his difficult year. Bob immediately expressed his experience in one word: “release.”

Batters and pitchers are examples of the most intense and focused instances of individual competition. In baseball, it is a conflict between two skilled players that is won most of the time by the pitcher, sometimes by a terrific pitch, sometimes by a less-than-perfect swing. In slow-pitch softball, the spotlight is on the batter. The batter’s total attention is on the flight of the pitched ball, and the rest of the world stops moving. Fielding a batted ball requires similar concentration. Your mind is on the game even when just standing in the field or sitting on the bench. Overall, win or lose, playing a sport is an enjoyable experience, largely, as Bob emphasized, because the intensity of the individual responsibility in the sporting moment liberates one temporarily from the demands and rigors of life.

Life problems, of course, are not limited to health issues. Several of my teammates continued to play softball during the course of difficult divorces. Painful moments in life are temporally eased on the ball field. Focused attention in one’s absorption of the game and the comradeship of fellow ballplayers allow a re-charging of individual energy. By its nature and impact, playing a team sport is significant therapy.

Some players find a reward in senior softball because of events earlier in their lives. One of our outfielders, who is also one of the best all-around players in senior softball, has always been an excellent athlete. Playing sports when he was young, however, was not a happy time for him because of family and social problems. He feels that he is “blessed” to enjoy his athleticism in his older years, something he couldn’t do when he was young. He wants to win as much as anyone, but he said he plays for the enjoyment of the game and the opportunity to help other less gifted players. Carrying himself humbly with grace and fluidity, he interacts quietly with his teammates. Most notably, he comes to a player’s side after an error in the field or a failed at bat with a gentle, but firm word of encouragement.

Tony, at age 87, has shrunk to nearly five feet tall. Replacement surgeries have put metal in one shoulder and metal in one knee. His fingers go every which way from multiple fractures during a lifetime of playing softball. I asked him, “How do you point at anything?” Several years ago, Tony had a heart attack. I saw him several months later at the ball park. With tears in his eyes, he said, “What am I going to do if I can’t play softball?” He never had to answer that question because he returned to playing, and to this day he still plays occasionally, although he most often comes to the games to coach and “be with the guys.” He said he had some advice for me: “Don’t quit until you have to.”

Ozzie, 82 years old, had his heart attack three years ago running to first base. Collapsed on the base, he was defibrillated by teammates. Ozzie woke up after bypass surgery determined to play again, and he was on the ball field the very next season. He likes to say, “I’m only three years old in my second life.”

These stories from the most senior of senior softball players illustrate what playing softball means to these men, pushing them to be on the ball field even in their elderly years. Although some find it difficult to articulate the reasons, most recognize the deep camaraderie and friendships that pull them to softball. These men further demonstrate that catastrophic cardiovascular events are not insurmountable obstacles. I find it especially heart-warming to observe how teammates, some 20 years younger, welcome and support these men during the games. Their presence, it seems to me, is never resented, and it’s a joyous response on the bench when one of them gets a hit.

I asked younger players (60 to 70 years of age) what they thought of playing with 75 to 85-year-old men. I was wondering if there was some impatience, some intolerance, a trace of resentment. The responses pleased me. With no hesitation, one emphatically said, “I learn from them.” Every queried player immediately smiled, denied any negative reactions, and expressed pleasure in being with older teammates. Perhaps Craig summarized it best when he said, “I hope to be older.”

What does the word “family” mean to you? Words that come to my mind are: love, loyalty, support, forgiveness, assistance. Most softball players give little thought to these concepts during a season, but how perfectly these words, “softball family,” capture what happens when one of us with a health problem walks on to the ball field. And it is not limited to your immediate teammates. Every player in the league eventually learns of your struggle, and I came to know that even those who didn’t hug me or say a kind word had a comforting, understanding look in their eyes when we saw each other. I came to appreciate their gifts of laughter and camaraderie.

Many men, young and old, do not know how to express emotion. There are more man-to-man hugs during and after a senior softball game than at any other time in most men’s lives. Senior softball is a vehicle for emotion, providing excuses and circumstances for manly interactions that are hard to do anywhere else. The older one becomes, the more priceless are these moments, and when struggling with an illness, the support of fellow senior ball players is precious.

These emotions and connections are surely not limited to the Pacific Northwest. These are basic human needs and reactions. Softball gives older men everywhere an opportunity to express and experience fundamental healthy and rewarding human behaviors that cannot be appreciated, even expressed, by individuals who are alone and isolated. Thousands of senior softball players on hundreds of ball fields have this experience, whether they are aware of it or not.

Seeing a fellow ball player with a health problem, there must certainly be a significant degree of sensing “it could be me.” And there certainly is the constant awareness of our age and our limited longevity. But most of these overt and subliminal interactions reflect the presence, apparent for some, underlying for others, of this wonderful kinship shared by senior ball players: Our Softball Family.

The Truth About Aging